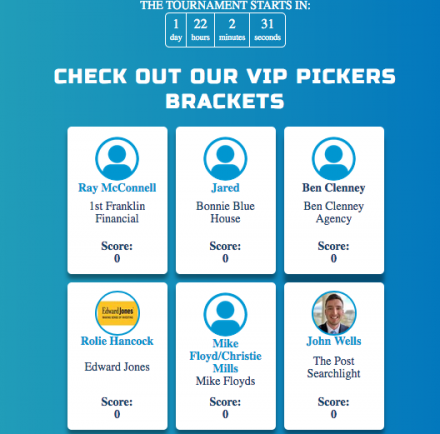 I still remember, fondly the first time I ever filled out a bracket for the NCAA men’s basketball tournament when I was 12 years old, always picking the higher seeded team. Sometimes that would work and other times it wouldn’t.

Since then, I’ve been filling them out year after year, hoping to win office pools or tournaments with friends.

This year, I filled out the College Hoops Challenge, which is a free online contest with prizes awarded to the winners. If you beat the incredibly long odds and pick a perfect 64-team bracket, you’ll win $1 million. Other prizes include a PlayStation 5 and gift cards.

To play, register at www.thepostsearchlight.com/contests/college-hoops and fill out your bracket. Picks must be submitted by March 19 at 10 a.m. before the first- round games begin.

Besides competing against people from all over Bainbridge and the country, you can also set up groups among friends or colleagues to see who can pick the best bracket. So if you want to pick a bracket based on who has the cooler mascot or uniforms, go right ahead. It’s all free, and mostly for fun.

You can even see if you defeat me and other celebrity pickers who probably don’t know as much about this stuff as we think we do. This has been a chaotic year in college basketball, where most of the traditional powers like Kentucky and Duke are out. That just means it’s anyone’s year to win, though – maybe even yours- so join us in seeing just how good (or disastrous) a bracket you can pick.