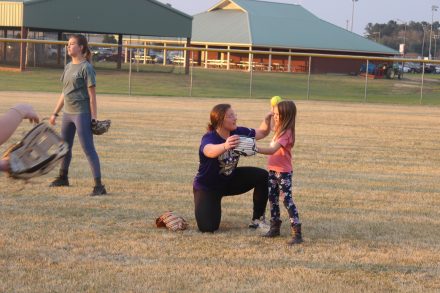 Former Lady Cats pitcher Lexie Delbrey shows a young player how to throw the ball during a Tuesday night clinic.

The Lady Cats softball team recently held a series of softball clinics that taught young players the basics of the game.

Lady Cats catcher Halle Cannon said the team really wanted to break the game down to the fundamentals for the younger girls ages 6-15.

“A lot of these girls jump straight into the hard stuff and never realize how important the little things are, so we break that down for them,” she said.

In order to break it down, Cannon said the team practices every day drills that they use with the girls.

“We really want to show them how the little errors made in the field can be fixed in order to keep them out of the game,” she said.

In order to encourage them, Cannon said they explain how if they keep practicing they will be so much better. Cannon has seen first-hand how much better some of the kids have already gotten just from a few weeks of clinics.

Cannon isn’t the only one noticing their skill set.

Lady Cats Head Coach Christopher Bryant said he has already been asking kids their name, where they go to school and what grade they are in.

“I definitely see players out here who would eventually be an asset to the Lady Cats,” he said.

Cannon said she is so proud of the girls who have shown up continuously and improved.

“I wasn’t sure if we would have anyone out here, but the first part of success is showing up and these girls have done that,” she said. “It just makes me really proud.”

Cannon concluded by encouraging everyone to begin playing softball recreationally, stating this is where she and former Lady Cats pitcher, Lexie Delbrey began, and those who continue to push will only succeed.

The JV Bainbridge Bearcats faced off against Cairo in a doubleheader last Monday, where they fell short in generating runs.... read more