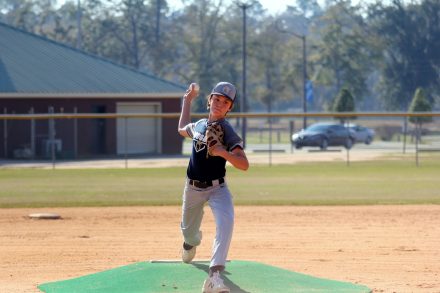 Aiden Whittaker pitches the Cougars to a win during their game against Georgia Christian.

The Grace Christian Academy Cougars strung together back-to-back wins over the last few weeks, beating Georgia Christian twice, 8-1 both times. The first game on February 25 saw Graham Beckham and Keith Eidson knock in four runs in the sixth inning, with Eidson getting two hits and Beckham stealing three bases. The boys stole eleven bases total in the game. As pitcher, Eidson only allowed three hits and one run, striking out 11 opponents and only walking one. Aiden Whittaker pitched one inning in relief.

The next face-off against Georgia Christian on March 8 saw Eidson, Whittaker, and Hines Roberts scoring four runs, while Roberts, Oathen Atkinson and Cade Wells combined for ten hits. Whittaker served as pitcher for this game, only allowing two hits and one run, striking out 14 and walking one.

The Cougars went on to play against Sherwood Christian Academy at home last Tuesday, winning 15-1. Atkinson, Whittaker, Roberts, Aiden Widner, Spencer Blanton and Jacob Moore scored nine runs in the third inning, while Atkinson allowed only one hit and one run and struck out 11. The boys made 14 hits in total during the game, and stole seven bases as well.

Lastly, the Cougars also played against the Miller County Pirates last Thursday, winning 4-2. Roberts had two hits, while Eidson only allowed two runs and three hits, striking out 10 and walking one. Roberts took Eidson’s place as the relief pitcher for the remainder of the game. Graham Beckham served as catcher, and made eight plays in the game, making no errors.

“These boys are working hard, and I am excited to see what the rest of the season holds for them,” Coach Ryan Riles told the Post-Searchlight. “I have continued to encourage the guys to play as a team and keep God first in all they do. This mindset is something I hope to instill in them as players and in life.”