Changing times in the sewing world 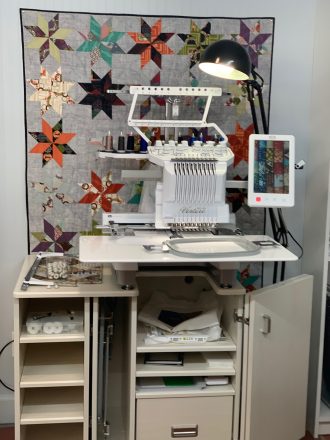 A multi-needle embroidery machine backed by a quilt made by Johns sits in the design studio space.

Once upon a time people learned to sew on a foot-powered treadle Singer Sewing machines.

Other decorative skills, such as embroidery and quilting were done by hand.

Now, Bainbridge is being introduced to a high end brand of sewing machines called Baby Lock, and there is a version for anything you want to do, be it embroidery, quilting, surging or straight line sewing. There is even a resident sewing educator on hand to help navigate through the processes.

Mike Johns has moved into the left front office of the recently renovated building on Broad Street, site of Melinda Taylor State Farm Insurance. It has formerly housed an antique shop and the Hart Rollins Furniture store.

Mike calls his business Mama’s Boy Design, LLC, and he currently does on-line sewing classes from that location. He has been teaching people how to use Baby Lock machines for six years now. It all began when his mother, Alice Jo Johns, purchased a Baby Lock machine and needed help learning to operate it. That is when Mike stepped up and joined the line’s group of educators. As you might guess from the name of his business, he gives credit to his mother for inspiring him, and now she actually works with him in the business.

With an M.A. from FSU in Costume Design, Mike knows how to sew as well as how to design. He has previously worked for theatres – some for theatrical companies in New York – developing their costumes. With the advent of COVID-19 and the closing of theaters, that business has all but disappeared.

Now, as new generations of stay-at-home people are seeking to acquire some of the creative skills of their mothers and grandmothers, the sewing lessons are booming. He is teaching virtually all round the country. He recently did a weekend session with a group in Tennessee. He has taught in N. Florida and Southern Georgia, but never in Bainbridge before.

He offers lessons on his Facebook page every Tuesday night, free of charge; but there is a charge for the other zoom and on-line courses he teaches for retailers.

The doors of Mama’s Boy Design have not yet opened to the public; but he states his ultimate goal is to open up a fabric store in the not too distant future, and at that point he will offer in-house personal sewing lessons of all kinds.
When asked “Why Bainbridge?” he answered, “Why not? It is home.” He further explains he was raised in Chattahoochee before his family moved to Faceville, where they currently reside.

Mike has added a precious new member to his family, an eight-week-old chocolate Labradoodle named Millie. She keeps him company as he works.

Watch for a grand opening announcement sometime in the future.

You will be amazed at the new machines that can do anything, and how far they have come from that old Singer treadmill.