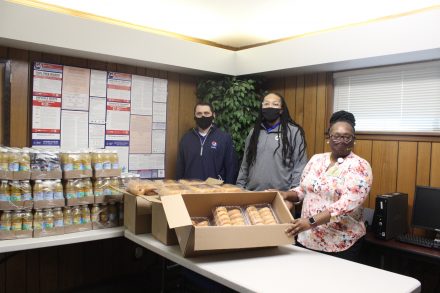 Kevin Horton and Tierra Carter of Pepsi gave juice and donuts to employees at Memorial Hospital and Manor.

Pepsi thanks nurses as COVID-19 pandemic nears one- year anniversary

Wednesday morning, Memorial Hospital and Manor employees were treated to a donut and juice breakfast courtesy of Pepsi.

Kevin Horton of Pepsi said the company is always looking for ideas to give back to the community, and they most recently provided breakfast for Bainbridge Public Safety, but as they were coming up on the one-year anniversary of the pandemic they wanted to give back to MHM as well.

“My wife is actually a nurse,” Horton said. “She was pregnant with our first son at the time when the pandemic hit and she would come home upset about seeing this case or that case and it just hit close to home.”

Horton said since giving birth to their son, his wife has gone back to work, but he still sees the anguish that most people don’t understand and the sacrifice not only his wife makes, but every nurse.

“Any day they go in, a mask could fail or a respirator and they could bring it home to their spouse or child and if it’s a bad enough strain it could kill them,” Horton said.

Horton finished by saying that the hospital has done a great job caring and providing for the community through the pandemic and he appreciates everything they’ve done and is glad he and his team could give back in this small way.