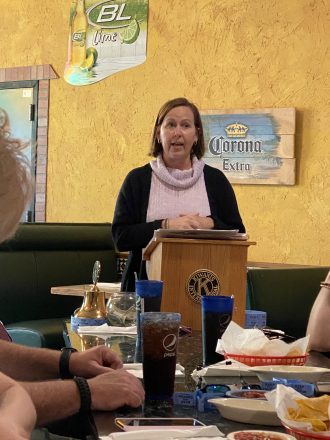 Glover spoke to the club about the growth downtown has seen this past year and some of the current projects the DDA is working on.

The past five years is where Downtown has seen most of its growth, according to Glover.

“One of the things that has been helpful is the RURAL tax zone,” Glover said. “Only 10 are designated a year.”

“It’s tremendous, we haven’t had these types of numbers in the last 10 years,” Glover said.

This has provided more than $800,000 in state tax incentives.

These businesses now have five years to allocate these tax credits.

“It’s been a great program for the folks who have invested in our downtown,” Glover said.

Glover added that this year has been particularly great for downtown businesses. She said they polled the businesses after Christmas and they reported a better year this year than last.

Isaac’s Bakery is one of the many businesses that thrived.

According to Glover, the community came out and strongly supported Isaac’s Bakery during Easter.

“She was able to make a whole one-month mortgage payment just from people buying Easter petit fors,” Glover said. “The community stepped up and stepped out and really supported our local businesses.”

Glover then detailed their upcoming work plan, which includes beautification and a bike rack campaign.

The campaign will include selling the racks for $300 and setting them up around downtown Bainbridge. She encourages any clubs or businesses interested in purchasing one to reach out, as they intend to purchase 15.

Glover said they also are hoping to expand their murals, beyond the “Hey Y’all” one.

The new mural will be near Wayne’s World that will hopefully be interactive and draw into the place making of Bainbridge.

Finally, Glover said the Hook and Ladder is primarily complete, along with the playground and is now up for rent and is available daily for lunch and dinner to sit and enjoy the outdoors.