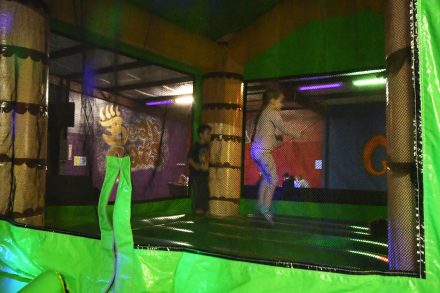 Kids could be found at Skate Towne on Sunday afternoon jumping on inflatables and raising money for the late Capt. Bedwell

Sunday afternoon Skate Towne hosted a benefit to raise money for Captain Justin Bedwell’s family after he succumbed to injuries sustained in the line of duty last week.

Skate Towne owners Kim and Steven Meredith said approximately a year ago, their home was broken into while their son was home.

The son witnessed the entire event, while he hid under the bed and called the law.

Steven said later that week, he noticed headlights shining into their home. He then grabbed his pistol and headed outside, but when he approached the vehicle it was a patrol vehicle and Captain Bedwell was sitting inside of it.

Bedwell then told the Merediths he intended to watch their home for the next three nights.

The family then decided to host an outing at Skate Towne, where kids could come play on blow up slides and bounce houses, provided by Meredith’s other business Backyard Parties.

“I hope and pray that if something were to happen to me, that people would try to be there for my family and offer their support and prayers,” Steven said.

The family donated all admission fees and 60 percent of the snack bar proceeds to Capt. Bedwell’s family.

“I knew it was my duty to do what I could to offer my support for those he loved,” Steven finished in a post. “It’s all of our duty.”

Hutto Middle School student thanked for his display of respect