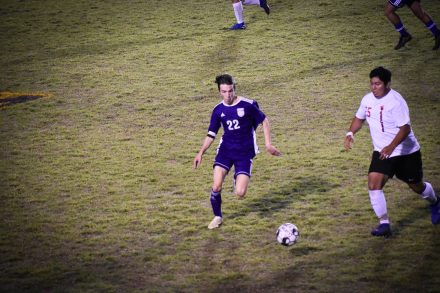 Aiden Mathews attempts to get the ball down the field and away from a Cairo Syrupmaker.

The Bainbridge High School boys varsity Soccer team split two region games last week defeating Monroe 11-1 in Albany, while coming up on the short end of a 3-2 overtime thriller vs. Cairo at Centennial Field in Bainbridge.

Against Monroe, Bainbridge Senior Forward Jose Avalo scored a hat trick, with three goals, along with Junior Mason Ard and Freshman Nicholas Tyre scoring two a piece in the 11-1 route vs. Monroe.

Bainbridge took an early 1-0 lead in the 4th minute as Junior Midfielder Mason Ard slid a pass to Avalo who scored from 7 yards out.

Monroe tied the score in the 6th minute following a corner kick that a Tornado Forward put in from 6 yards out.

Bainbridge kept the heat on and in the 16th minute Bearcat Freshman Midfielder Brock Williams found Avalo on a cross to the center, who finished with a scoring shot from 8 yards out to give the Bearcats a 2-1 lead.

Avalo then lofted a pass to Williams on a breakaway who converted into a goal in the 19th minute, to extend the Bainbridge lead at 3-1.

Bearcat Freshman Midfielder Nicholas Tyre found Avalo open with a pass , at the top of the Monroe penalty area, in which he quickly shot scoring from 21 yards out, widening the score at 4-1 in favor of Bainbridge.

Tyre scored a goal in the 25th minute to make the score 5-1, after receiving a pass from Bainbridge Junior Defender Hunter Harris.

From then on the Bearcats scored six more goals with Tyre (26th), Ashton Mathews (27th), Ard (30 & 31st), Javier Salgado (33rd) and Aiden Mathews in the 34th minute.to round out the scoring. Assisting in those final scores were Ashton Mathews with 2, Luke Emmons with 2, Ard, Avalo, and Juan Becerra with one each.

Thursday at Centennial field, the Bearcats hosted Cairo high School, and in a frantic affair, came up just short in a 3-2 Syrupmaker victory in overtime.

In a rare manner all five goals were the result of penalty kick goals made during the course of the regulation and overtime play.

The first goal came in the 19th minute as a Cairo offensive player was fouled by a Bearcat defender on the edge of the Bainbridge penalty area. On the penalty kick the Syrupmakers Brandon Maldonado converted to the left side to give the visitors a 1-0 first half lead.

Two minutes into the second half the Syrupmakers Maldonado again converted a penalty kick, following a foul by Bainbridge, to take a 2-0 advantage.

But, Bainbridge would not be denied as they mounted several attacks until the 51st minute as Freshman Brock Williams was tripped up at the top of the Cairo penalty area. Bearcat Senior Forward Jose Avalo calmly stepped up and struck the penalty kick to the top right of the goal to close the Cairo lead at 2-1.

Ten minutes later Avalo was fouled in the penalty area, but this time Junior Midfielder Mason Ard stepped up and drilled the penalty kick to tie the score at two.

Despite a flurry of efforts neither team could get a shot to cross the goal line the rest of regulation, which sent the game into two overtime periods.

Cairo mounted an attack with four minutes remaining in the first overtime period which resulted in being fouled in the penalty area for the third time setting up another penalty kick try.

Maldonado calmly converted his third penalty kick to give Cairo a 3-2 lead.

Despite being valiant in their attempt, Bainbridge had chances, but could not get a shot in the goal the remaining time, resulting in the Syrupmaker victory.

Bainbridge dropped their overall record a 1-1-1 on the season and 1-1 in region play.