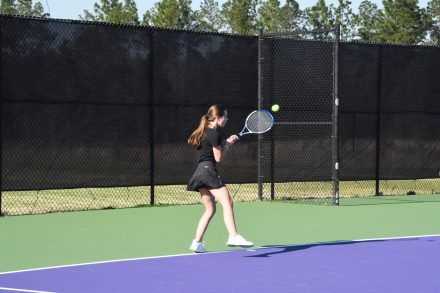 Lily Tomek returns a volley from a Lady Yellow Jacket. Tomek ended up winning both sets.

Bearcat Tennis serves up a win against Thomas Co.

The Bainbridge Bearcat and Lady Cats tennis team took on Thomas County Central on Thursday, where the Lady Cats dominated 5-0 and the Bearcats won 4-1.

Lady Cats number one singles Rylan Bland took on opponent Charlize Scudder, where she won in a complete shutout 6-0, 6-0.

With all singles players winning, it was now up to the doubles teams.

The Bearcats then prepared for their matches.

Number three singles, Hayden Martin battled it out against Cable Willis. Losing his first set 4-6, Martin made a comeback 6-0 in the second set. This sent the match into a third set with the first player to ten points winning. Martin eventually overpowered Willis, winning 1-0.

The Bearcats number one doubles Brent Miller and Jack Burke then hit the court and won over Josiah Ganga and Joshua Williamson 6-0, 6-0.

Finally, number two doubles Lucas Reynolds and Aiden Tabb sealed the win over TCC with a 6-1, 6-0 win over Braxton White and Caleb Kimeer.

Lady Bearcats Soccer surge forward with back to back victories