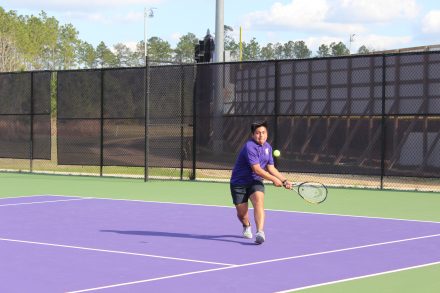 The Lady Cat and Bearcat tennis teams have been hard at work on the courts, most recently bringing home a win over Early County and Dougherty County.

The teams first took on Early County on February 24, where the Lady Cats won 4-1 and the Bearcats won 3-2.

Loeffler and Wade won the first set 6-3, before Early County’s Charlye Allen and Shy Salter took home the next set win 6-2. Finally, Loeffler and Wade pulled away with a 1-0 win, giving BHS Lady Cats the victory.

The Bearcats played on the opposite side of the courts, where number one singles Robert Bryan Shockley dominated in a resounding 6-0, 6-0 fashion.

The teams then hit the courts again on February 25 against Dougherty County, where they switched up the lineup.

Hall took the position of number one singles for the Lady Cats and dominated both sets 6-0, 6-0.

Thomas and Wade came together as number one doubles and won 6-0, 6-1.

Seniors Robert Bryan and Anna Marie hope this only the beginning of an amazing season to come.

Robert Bryan acknowledges they have some tough competition ahead of them, especially TCC, but is ready for the challenge.

Coach Amy Thomas couldn’t agree more. She is ready to see the seniors finish off a season, after such a sense of incompleteness last year.

“I wish I could’ve done this last year with that group of seniors, but just as the pandemic taught us we will keep moving forward and making the best of every moment,” she said.

Hall said she is cherishing every moment with the group of girls and guys on the team and is ready to bring home a region championship.

The teams will compete against Thomas County at home on Thursday at 4 p.m. in hopes of another win.

Lady Cats Basketball falls in second round of state playoffs

The Lady Cats ended their state playoff run on Friday night against Troup County after a win 40-34 against undefeated... read more