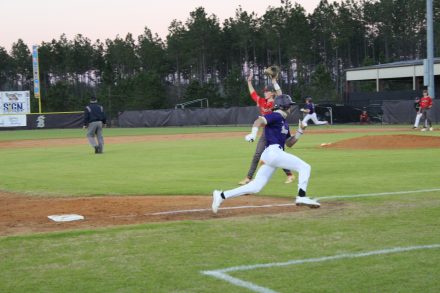 Michael Conder rounds third base and heads home during the game against the Thomasville Bulldogs.

The Bainbridge Bearcat Baseball team is off to a hot start 4-0, with their most recent home victories against the Thomasville Bulldogs 8-4 and Port St. Joe 8-7.

The Bearcats took on the Bulldogs Tuesday night, where they started hot in the first inning.

Michael Conder tripled on a fly ball on the first play for the Bearcats, before Quayde Hawkins hit a sacrifice fly to center field, allowing Conder to score.

The Bulldogs made a comeback in the third inning, scoring two runs.

Refusing to give up easily, the Bearcats scored another run in the third inning, tying up the game.

Conder was walked, before Hawkins hit a ground ball, allowing for Conder to score again.

The Bearcats took the lead for good in the bottom of the fourth inning.

Dewey Brock singled on a ground ball, as Jackson McCullough stepped up to the plate.

Connor Poitevint then hit a line drive, allowing Smith to move to third base and McCullough to reach second.

Conder was back up to bat, hitting a fielder’s choice and giving Smith the chance to score, while Poitevint was tagged out at second base.

Hawkins was then walked, while Nolan Barr singled on a hard ground ball in center field. McCullough and Conder scored, giving the Bearcats a 5-2 lead.

Colton Harrell allowed the Bearcats to score again on a single fly ball.

Following a great showing in the fourth inning, the Bearcats improved their lead in the bottom of the sixth.

Conder kicked things off, hitting a fly ball and reaching third base. Hawkins was walked again, while Conder remained at third base.

Barr stepped up to bat, singling on a ground ball and allowing Conder to score.

Will Beckham hit a sacrifice fly, giving Hawkins the chance to score, before the Bulldogs entered the top of the seventh and scored two final runs.

Brock pitched the Bearcats to victory, allowing four hits and two runs over six innings, striking out 11 and walking one. Barr threw one inning in relief.

The Bearcats took home another victory Friday night at the Bearcat Diamonds in a nail biter.

Barr singled on a line drive in the bottom of the first inning. While Barr waited at first, Harrell was walked and Beckham stepped up to the plate.

Beckham tripled on a fly ball to right field, allowing Barr and Harrell to score.

Port St. Joe answered with two runs of their own in the top of the second inning.

Neither team scored in the third inning. However, Port St. Joe took the lead in the top of the fourth inning, scoring five runs 7-2.

The Bearcats struggled to catch up, but finally scored again in the bottom of the fifth during a pitcher’s error.
Beckham was walked, along with McCullough, Jase Godwin and Poitevint.

In the bottom of the sixth, the Bearcats finally caught up with Port St. Joe, leading by only one run.
Hawkins started the inning, singling on a ground ball. Barr was then walked, while Hawkins advanced to third. Harrell was also walked, loading the bases.

Brock then grounded out, but giving Hawkins the opportunity to score.

It all came down to the bottom of the seventh inning with the Bearcats at bat.

Poitevint took the plate first and hit a ground ball. Conder then singled on a bunt, while Poitevint advanced to third.

Barr stepped up to bat and doubled on a hard ground ball, giving Conder and Poitevint the chance to score and finish out the game 8-7.

The Bearcats will face off against Port St. Joe again this weekend on Saturday at 3 p.m.