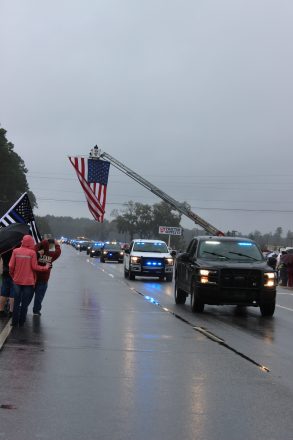 Local and regional officers, deputies, investigators, EMS, firefighters and law agencies came together on Tuesday, March 2, 2021 to bring home Captain Justin Bedwell after he succumbed to injuries sustained in the line of duty. Crowds of people lined the street to show their condolences during the processional that took place down Tallahassee Highway and onto Shotwell Street.

All Gave Some, Some Gave All: A Tribute to Capt. Justin Bedwell

Loving husband, father, friend, co-worker and Brother in Blue Captain Justin Bedwell ended his watch on Monday, March 1, 2021 after succumbing to injuries sustained in the line of duty.

Bedwell began his career in law enforcement when he joined the Decatur County Sheriff’s Office on December 5, 2001 and was sent to the ABAC Police Academy. There, he graduated and returned as a certified deputy.

According to Bedwell’s mother, Georgia, “He had wanted to be an officer since he was 5-years old.”
Bedwell followed his dream of becoming an officer and continued to train and educate other officers along the way.

In 2015, he began training sex offender registration coordinators for other counties, along with DCSO employees.

He was a primary field training officer (FTO) and trained many of the younger deputies employed now.

During the first six months of becoming a new deputy, recruits are required to ride with a FTO. It was a task Bedwell enjoyed.

Bedwell’s natural dedication to helping others was recognized in November 2013 by Governor Nathan Deal when he received a Commendation.

The Commendation stated that “Captain Justin Bedwell of the Decatur County Sheriff’s Office is an outstanding member of the public safety community whose dedication to service embodies the very best of men and women in uniform.”

“Captain Bedwell went above and beyond what was required or asked of him,” the Commendation reads. “Captain Justin Bedwell has set an exceptional example for others in his profession and throughout the state through his devotion to fulfilling the needs of those he serves.”

DCSO Adminstrative Assistant Erica Hitchcock said Bedwell did not only go above and beyond in his professional life, but his personal life as well.

“He would do anything for anybody, whatever they needed,” Hitchcock said. “I’m sort of an introverted person and I can count on one hand the amount of people I would call genuine friends, and he was one of them.”
Deputy Victor Strickland couldn’t agree more.

“He would help you any way he could,” Strickland said.

Strickland recalls the first night he met Bedwell; Strickland was attempting to make an arrest while working with Bainbridge Public Safety and Bedwell backed him up.

“He was good at that; he backed up his brothers in blue,” Griffin chimed in. “He was an example of a Brother in Blue.”

Strickland agreed, saying he had been in the law enforcement field for a long time, but Bedwell was a genuinely, unique individual and it was a pleasure to have been his friend.

Bedwell was known for his willingness to help wherever he could among his co-workers, but his superiors noticed it as well.

Griffin and DCSO Chief Wendell Cofer referred to Bedwell as the “do anything guy.”

Cofer said Bedwell would volunteer to cover inmates at the hospital and regularly agree to shift work and moving offices.

“When I knew he was on duty, I knew everything was fine,” Griffin said. “He was a fantastic shift Sergeant, Lieutenant and now Captain.”

“I knew the safety of our citizens was in good hands as long as he was in charge of our shift,” Griffin finished.
Griffin, Cofer and the entire DCSO family were deeply saddened by the loss of their fellow officer and friend.

In order to help Bedwell’s wife, they have set up a donation account in the name of Katherine Bedwell at the First National Bank of Decatur County.

Lt. Brandon Draper and Clerk of Courts Cecilia Willis has also set up a GoFundMe account at https://www.gofundme.com/f/decatur-county-sheriff-deputy-so9?utm_campaign=p_lico+share-sheet&utm_medium=copy_link&utm_source=customer

Imports of Stallings Motors in nearby Cairo, has now branched off to Bainbridge. They have been in business in Cairo... read more