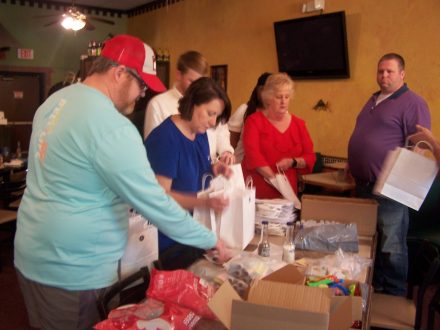 Kiwanis Club of Bainbridge spent their regular Thursday meeting giving back to those in need. The club recently announced they were accepting donations to make goody bags for residents at Memorial Hospital and Manor. Upon collecting the donations, the club filled up over 86 goody bags on Thursday full of travel sized lotions, stress balls, suckers, pens, notepads, chap sticks, Rubik’s Cubes, hand sanitizers, fans, koozies and magazines.

MHM Activities Director Brittany McCoy and Assistant Joyce Snowden were in attendance at the meeting and spoke on how much this would mean to the residents.

“We just began break-out activities again with stipulations of course,” McCoy said. “But, it’s been great. We are starting to see some changes in mental depression states and we haven’t even been back a full seven days.”
McCoy said they are hoping to be able to open the Manor to the public again soon and were meeting later on in the week to discuss the future.

McCoy said the residents were disappointed they weren’t able to partake in the Miss Memorial Manor Pageant, which is annually put on by the Kiwanis Club, this year.

“It is something they will never forget; we have stories for days and it really brightened the lives of those who participated,” McCoy said.

She told Kiwanis Club she appreciates how often they check in to make sure all the residents’ needs are being met.

“If it had not been for our organizations in the community, I don’t know what me and Mrs. Joyce would have done these past few months without residents being able to see their family,” McCoy said.

McCoy and Snowden then loaded up the bags and took them back to the Manor to surprise residents with later that afternoon.