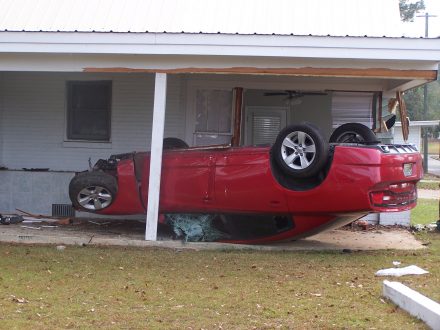 A car flipped into a home for sale on Tallahassee Highway after the driver suffered from a medical emergency.

Friday morning, Georgia State Patrol and Bainbridge Public Safety responded to a single-car accident on Tallahassee Highway after the driver veered off the road and crashed into a home for sale.

According to GSP Trooper Joshua Stark, the driver of the vehicle was traveling underneath the bypass when he suffered from what appears to have been a seizure. He then failed to maintain his lane, hit the crosswalk, traveled through the ditch, struck an embankment and traveled through the road before striking the home and coming to a final rest.

Bystanders and witnesses rushed to the driver’s aid and attempted to help get him out, before EMS arrived on scene and got him out safely. The driver was reportedly responsive and alert and was taken by ambulance to Tallahassee.

The driver’s girlfriend told Bainbridge Public Safety, he had also suffered a seizure earlier that morning at approximately 6:30 a.m.

Stark said in these incidents, it is up to the driver to discern how long before they decide to drive again, as they know their body best, but he may wait a while before getting behind the wheel again.

“Sometimes it’s just one of those things where it’s a freak accident,” Stark finished.

Each month the Decatur County Artists Guild will honor one of their members with an exhibit featured in the Kirbo... read more