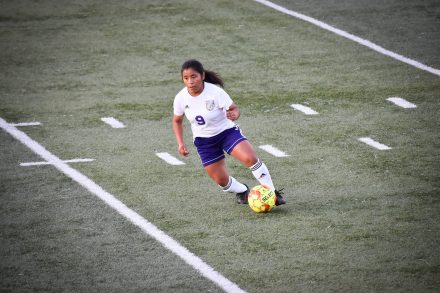 A Lady Cat soccer player takes the ball away from the Lady Wildcats and to the net.

Last week the Bainbridge High School Lady Cats varsity soccer team traveled to Valdosta, fought “tooth and nail” with the host Valdosta High Lady Wildcats, but gave up two late goals to end up on the short end of a 2-1 score at Valdosta’ Bazemore-Hyder Stadium.

After a scoreless first half both teams got their offense in gear with several attacks at the opposing goals.

With fifteen minutes remaining in the contest Valdosta knocked the ball out on the endline, creating a corner kick opportunity for the Lady Cats. On the corner kick Bainbridge Junior midfielder Evelyn Mach sent the ball in towards the goal that was deflected slightly off the Valdosta Goal Keeper’s hands. Lady Cat Senior Midfielder Emma Briggs quickly crashed the goal creating a scramble for the loose ball, along with several Valdosta defenders, but she was able to knock the ball just over the line for the goal to give Bainbridge a 1-0 lead.

Valdosta quickly tied the score five minutes later on a free kick following a foul by a Bearcat defender just outside the penalty area. The Valdosta player first shot and missed, but it was before the ball was whistled into play, and thus was given another opportunity lofting her 20 yard free kick just off the hands of Bainbridge Senior Goal Keeper Keilaya Pryor. to tie the score at one.

Valdosta scored their winning goal with just five minutes remaining again the result of a free kick attempt this time from thirty yards out to give the Lady Wildcats a 2-1 victory.

Pryor had 5 saves in the loss.

Bainbridge Head Coach Chip Ariail felt overall he thought the Lady cats competed well, and was proud of their effort.

The Grace Christian Academy Cougar’s basketball season came to an end with a loss to Arlington Christian, after scoring a... read more