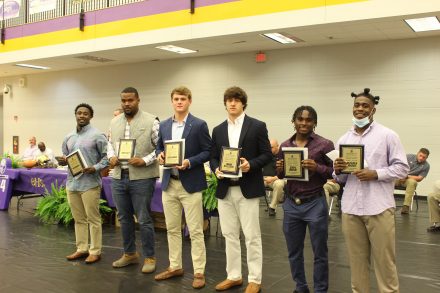 Coaches, players and family members gathered at the BHS gymnasium Monday night for the annual football banquet to recognize the accomplishments made by the team this season.

Drew attended Thomas County Central High School, where he played football from 2007-2010. He then went on to play at University of Georgia, before signing with the Miami Dolphins in 2015. He has also been a member of the Cleveland Browns, Green Bay Packers and Carolina Panthers and Montreal Alouettes. He is now an entrepreneur and goes around telling his story to others.

Drew is a strong man of faith and told the players God had laid on his heart exactly what he wanted him to say.

Drew explained he was a from “a small, one-horse town.” He said there was nothing particularly special about him, but just because someone comes from somewhere small doesn’t mean they can’t do amazing things.
He said when he graduated he was ranked number one in the state, number two in his position and number three in the nation.

Among Drew’s many coaches, one always stands out in his mind. That coach is Tracy Rocker.

Drew explained this series of drills applied not only during practice, but in life.

“I don’t know what your vision is in life, but whatever it is you have to find a focus point in it,” Drew said.
“Then you have to tap it, you can’t jump into your vision full force; you have to have the fundamentals first,” he reminded them. “If you don’t, when you go to strike, you’ll be off center.”

Once everyone has the fundamentals, they can bring the power and the Lord will do the rest, Drew said.

“The Lord will bless whatever you put your hands to,” Drew finished.

Bearcat Team Awards were then handed out.

Next, Littleton presented the Iron Man Award to Zion Bouie and Trey Bouie.

The Tommy Smith Hustle Award was given to William McCorkle, who demonstrated the same quality of character, leadership, academic achievement and hustle that Thomas Livingston Smith, Jr. demonstrated.

The final awards were the Bearcat Awards, which went to Rashad Broadnax, Quayde Hawkins, Lawson Chandler and Ridge Baggett.

Each class was then given their football certificate before the Bearcat Touchdown Club presented a special award to Littleton for being the winningest coach in Bearcat history.

The Bainbridge Gymnast-A-Cats were on the attack in their first meet of the year in Macon. Kaylee Kale was outstanding... read more