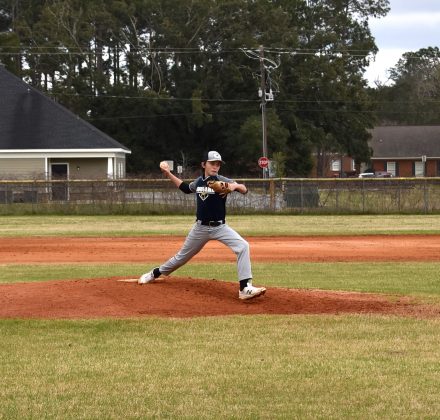 Aiden Whitaker pitches on Friday afternoon at the BMS game.

The GCA Middle School Boys baseball team lost to the Bainbridge Middle School boys this past Friday, 0-4. Oathen Atkinson, Spencer Blanton and Aiden Whitaker made several hits for the Cougars, with Whittaker hitting a double in the fourth inning. Whittaker was also the Cougar’s starting pitcher. He pitched for four and one-third innings, before Keith Eidson took over. Whittaker made three strikeouts and only allowed two hits during his time.

“I like the improvements I am seeing in all of my guys, especially with this being our second year together,” Coach Ryan Riles told the paper. “We will continue to work hard and improve each game. We fell short on Friday, but I am very excited to see what the season holds for this team. I have a great group of guys who are working extremely hard.”

The Middle School Cougars will have an away game at Georgia Christian on Thursday, while their next home game will be Monday, March 1.