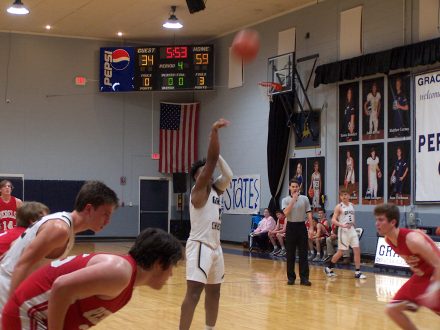 Corin McKay goes for the free throw during the game against the John Hancock Rebels.

The Grace Christian Academy Cougar’s basketball season came to an end with a loss to Arlington Christian, after scoring a victory against the John Hancock Rebels the preceding Tuesday.

Tuesday’s game saw the boys come out strong in the first quarter, scoring a total of 18 points. Wyatt Carpenter scored a three-pointer and a lay-up, while making two free throws; Corin McKay shot a three-pointer and two lay-ups; and Jafus Ferguson and Carter Hathcoat each scored a lay-up a piece.

The boys were not as fortunate when they faced off against Arlington, with the boys losing, 71-36. Carpenter scored 15 points total; Hathcoat scored 11; Ferguson scored 5; McKay scored 3; and Carnes scored 2. “I’m very proud of how hard my team played. They kept their heads up and continued to strive against incredible odds,” Coach Travis Harrison said. “Harrison will lose four seniors this year,” Kellie Dollar told the paper, “but has incredible talent waiting in the wings for next year.”

Coaches, players and family members gathered at the BHS gymnasium Monday night for the annual football banquet to recognize the... read more