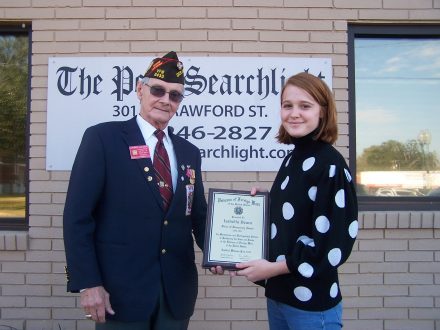 The Voice of Democracy Program is the Veterans of Foreign Wars’ premier scholarship program, where students compete by writing and recording an audio essay on a patriotic theme. This year’s theme was “Is This the Country the Founders Envisioned?”

In Beam’s essay titled, “Reality of a Vision,” she states the prosperity today is not the kind the Founders intended.

“In the past 250 years, America has undergone a myriad of changes,” Beam wrote. “However, the most sweeping difference has been the upsurge in Governmental Control. The Founding Fathers fought passionately to renounce a freedom purloining monarchy. This is why the first American Lawmakers saw the importance of a governmentally minimal nation. Their belief relied heavily upon citizens taking responsibility for their actions and governing themselves. After 20 years, self- accountability evolved into a foreign concept. After 100 years, it was altogether lost.”

Beam goes on in her essay to explain that instead of encouraging self-governance to American citizens, Governmental Officials strove to expand their control. Now, some 200 years later Americans have landed in a “deep pit where authorities are allowed to regulate any law to maintain power.”

“Not only have American freedoms been reduced, but they have been placed into the hands of manipulative representatives, who see citizens as a steppingstone to clout,” Beam wrote.

Beam continues to explain other areas the Founding Fathers would not have envisioned; one of which is the standard of education.

“The standard for education has been diminished beyond what our Founding Father could have imagined,” Beam reiterated.

Beam further explains that during the time of the Founding Fathers, young men were encouraged to attend college at the age of 16, while now students are pressed to engage in one-size-fits-all program, learning the bare minimum of American educational history and later just regurgitating the information on a test.

“Student are now taught not how to think but what to think,” she finished.

Beam’s final argument for America not being the place the Founding Fathers envisioned is the amount of respect individuals show for differing opinions.

“The amount of respect differing individuals show each other is dangerous, and something the Founding Fathers would be appalled by,” she writes.

Beam believes individuals will always have a different plan, but the one common goal they should all share is to have a better America.

“Half of the citizens fight to make America prosperous, but a new movement has set out to abolish the most flourishing country on the planet,” Beam said.

Beam writes that she believes American cities have been set ablaze and the streets have been overrun not to evoke productive change, but to instill fear into the bold. Looking back at history, Beam said the first leader was unanimously elected not because he promised a boat for every vote, but because he understood the plight and needs of the newly born nation.

Beam finished her essay, saying she, along with every other American, is blessed to live in the most prosperous and free country in the world, but the country is still far from where it began.

Beam’s winning essay will now continue further into the competition in hopes of winning the grand prize of $30,000.

Vaccine recipients benefit by not having to quarantine

The Centers for Disease Control this week announced that those vaccinated against Covid-19, and who meet certain criteria, do not... read more