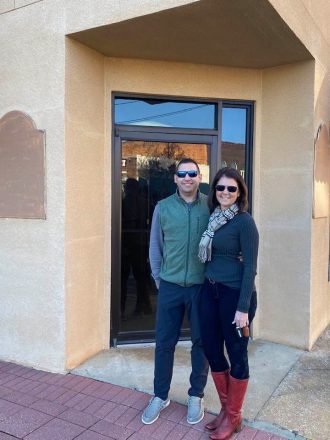 In late January they purchased the former Bolton Insurance office building on the corner of Broad and Troupe Streets.

Garrett, who had the original idea to purchase and update a downtown building, explained how he chose this building. “The building is 110 years old, but was updated in 1980 and it has good infrastructure and has been well cared for.”

Stacey added she was attracted to the building, its history and how they plan to keep the exposed brick walls inside as many of the other building renovations have done.

Their plans are to retain and redecorate the downstairs office space. That project should be ready in a matter of weeks, and they already have an interested party to lease it. The upstairs will take more time, as they will be doing a complete overhaul to convert it to a three bedroom, two bathroom apartment.

“The City is putting together a drawing of the outside façade and what it could be. If we like the proposal we will go with it,” said Stacey, adding, “But we will definitely keep the stucco exterior; but not sure if we will retain the same color.”

The general contractor for their project is Marcus Breeden and work is progressing rapidly, according to Stacey. She expects the upstairs apartment to be ready in a few months.

The couple is very excited to be a part of the ongoing downtown renovations. “The downtown is growing and we are eager to help restore the beauty of the old buildings and make it a beautiful place for people to want to go,” concluded Stacey.

Garrett, who often talks with prominent investors, such as Tyler Thomas, owner of The American, said if this one works out, he would be interested in buying another building.