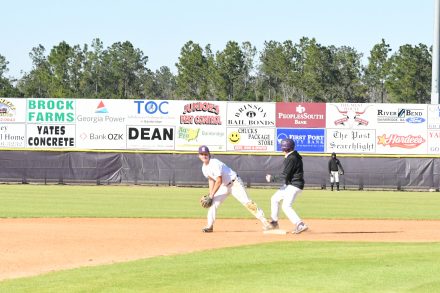 Jase Godwin plays second base during a practice drill, while a JV player stands on base, waiting to steal.

The Bearcat Baseball team returned to the Bearcat Diamonds last week to hold practice and prepare for another winning season.

Head Coach Donnie Coxwell said he feels good about the season, despite only recently getting all the players back and out of quarantine.

“We’ve had COVID and 11 guys out at any given time due to COVID and quarantine,” he said.

Now that everyone has returned, Coxwell has put his nine returning seniors to work.

Coxwell said the team looks forward to playing arch rivals, Thomas County Central and Cairo and adding the “Albany schools” to the lineup.

“We’ve got to go out and do what we can do to compete for a region championship that’s our goal is to bring one home,” he said.

In order to help bring home a region championship, Coxwell said he is really having the team focus on competing at practice. He doesn’t’ want the team to depend on their opponent making mistakes in order for them to gain a win; he wants it earned.

“We are really focusing on doing the little things right,” he said.

Getting every small detail right is all part of a new drill Coxwell has implemented during practice called the perfect play.

During the perfect play, every pitch, every catch and every steal has to be perfect or the team has to do burpees or some other form of punishment for not being perfect.

This art of perfection has proven to be a game changer for many seniors. Coxwell said six players signed early for baseball scholarships.

“We have some talent, we just have to play together and get this thing done,” Coxwell said, referring to winning a region championship. “That’s what we are focusing on.”

The Bearcats will have their first baseball game on February 15 in Dothan at Headland High School at 4:30 p.m.

The JV team will have their first game on February 18 at home at 4:30 p.m. versus Colquitt County.