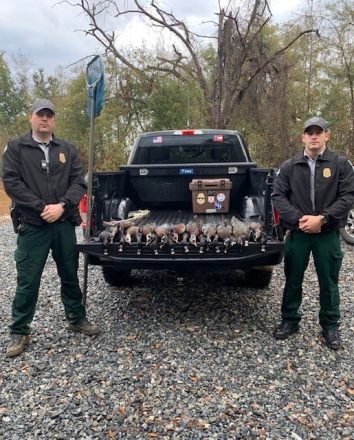 Brown worked two cases in Decatur County that resulted in 11 citations, six of which were adults.

During the case, the subjects admitted to corn being in the pond they were hunting from.

“The problem with baiting the ponds is it puts all the ducks in one area,” said DNR Sergeant Tony Cox. “It gives that hunter an unfair advantage and doesn’t give other hunters a chance.”

Cox said DNR game wardens can usually tell when a pond is baited.

“We know ducks are looking for food because they are migrating, but when you have several ponds in an area and 200 ducks in one pond and none in the others; it makes it suspicious,” Cox said.

Cox is aware there are sometimes alternate reasons, such as natural duck food provided near the pond like acorn trees, but if the pond looks to be baited he conducts a search. Cox said they have a special scoop that they use to scoop to the bottom of the pond that will bring the bait back up.

Following the admission of the pond being baited in Decatur County, all seven wood ducks were confiscated.

That same day Boatright checked five individuals on a pond in Seminole County, which he had already determined was baited. All five individuals were issued citations and fifteen ducks were confiscated.

“The state owns all the wildlife here until it’s claimed,” Cox said. “However, if it’s killed illegally it’s still the state’s.”

The confiscated ducks were donated to a local family in need of food.

Cox reminds everyone that hunting ducks over bait is illegal, as is killing more than six ducks per person.