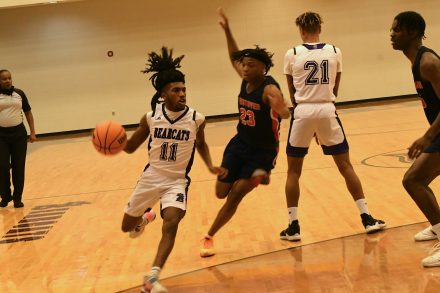 Dylun Worlds dribbles the ball down court, while a Patriot tries to defend the net.

The BHS Bearcats went up against Westover on Friday, January 29, after having lost to them earlier this season. The girls scored an overwhelming victory, 31-18, while the boys had a nail-biting close win with 49-47.

Coming back from half-time, the girls only scored 2 points in the third quarter, with Salter scoring a lay-up. The girls finished the game with 5 points. Taniah Register shot a lay-up, and Salter made a single free-throw and a lay-up.

The boys came back out stronger after half-time, scoring 15 points. Taylor scored three free-throws, a lay-up and a three-pointer; VJ Ervin, Cooper and Worlds each made a lay-up; and Parris scored a free-throw.

They finished out on their strongest note, making 16 points in the final quarter. Taylor made four free throws; Cooper scored two free-throws; Grant scored a single free-throw; Worlds scored two lay-ups; and Dialan Beard made a three-pointer and a lay-up.

“I’m very proud of the team,” Coach Jeff Page told the Post-Searchlight. “It was a big win for us.” The Bearcats would go on to play against, and ultimately lose to Monroe on Monday night.

The BHS SwimCats competed in the region championships over the weekend, finishing with four first place times and the girls... read more