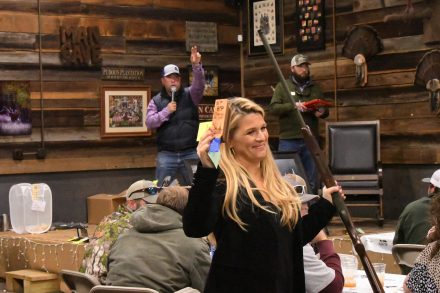 A host at the National Wild Turkey Federation meeting shows off a gun and turkey caller to guests for them to bid on.

The National Wild Turkey Federation held their annual Gobblers banquet last Thursday, January 28th. Normally held in Colquitt at the old Colquitt theater, the banquet was held on Klay Armstrong’s property this year instead, out of concern for COVID. Attendees were served a meal of pork chops with a honey bourbon glaze, cheesy potatoes and green beans, while the main events at the banquet were a raffle, and both a traditional and silent auction. Prizes offered included an AR-15, a CZ over/under shotgun, a five-day bird shoot in Argentina, as well as various paintings and decorations.

Various things were discussed during dinner, with David Hendrickson speaking about the upcoming Beards for Benefits turkey hunt. Founded by Armstrong, these hunts are arranged for handicapped children and wounded veterans. The hunts are scheduled to take place on March 26-28, and will be held on both Armstrong’s land, as well as other participating landowners. A guide will accompany the pair of child and veteran, with the intention of both bagging a turkey over the weekend. “It’s a way for him to give back to others,” Ben Clenney told the Post-Searchlight, in regards to Armstrong founding it after he himself was in an accident.

Also, the chapter was presented with the Golden Gobbler Award, which is an award given based on funds and profits raised by chapter. According to Clenney, this marks the second year in row the chapter has won this award. “Banquets are where roughly 85% of our membership and 75% of our fundraising comes from,” he said in regards to the NWTF.