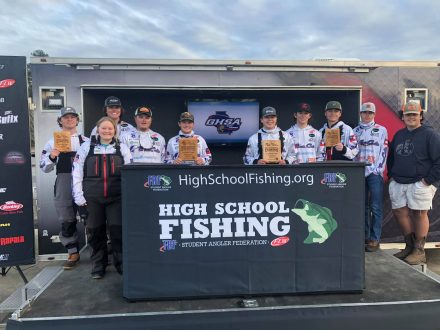 The BHS BassCats competed in the first GHSA High School Varsity Fishing Tournament last Saturday. The BassCats had six teams competing in the tournament, with five qualifying for the state championship. The team of Bowynn Brown and Shane Dill won the tournament overall, with a tournament fish weight of 25 lbs. and 15 oz. Roy Matthews, advisor of the BassCats, spoke with the Post Searchlight on the clubs history up to this point.

Originally started seven years ago, the BassCats were originally not a varsity sport, nor a very large affair. “We only had 25 boats on Lake Seminole at our first tournament,” Matthews said. “We had 120 boats from all over the state at the GHSA tournament.” Before being made a varsity sport, the main tournaments the BassCats could compete in were hosted by The Bass Federation (TBF). According to Matthews, they only competed in one tournament a year at first, before they moved up to competing in eight a year on the Georgia BASS Fishing Trail.

“We started off with nothing, the community has really come in and helped, with local businesses sponsoring us.” Some of their sponsors include First National Bank, Skeeter Creek Automotive and Miles Realty.

Unlike most sports that have regular practice, the BassCats simply have meetings before the tournaments. But they do more than just fish in tournaments. The team has also held conservation events and done community casting booths.

While Matthews is the team’s advisor, he gives a lot of credit to the parents and the community for helping make the team what they are now. “I grew up here, I fish a lot, but I don’t bass fish much… it’s been those in the community that know the bass fishing world better than I that really helped.”

Bainbridge has experienced much economic growth in recent years. But, it hasn’t just been big businesses like Taurus moving in.... read more