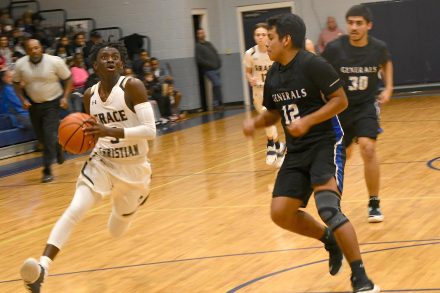 Corin McKay took the ball straight to the hoop in the game against Georgia Christian.

The GCA Cougars Basketball teams squared off with Georgia Christian Friday afternoon. The Varsity Boys won with a sizeable lead, 56-43, while the Varsity Girls also scored a victory, 38-28.

After breaking for half-time, the boys made an overall score of 15 points in the third quarter. Carpenter scored a lay-up; McKay scored two lay-ups; Jafus Ferguson scored a free throw and a lay-up; and Hathcoat scored two three-pointers.

The boys closed out the fourth quarter with 13 points total; Carpenter scored a three-pointer and two-lay-ups; McKay scored two lay-ups; and Ferguson scored a lay-up, bringing their winning score to 56.
As for the Varsity Girls, they scored 6 points in the first quarter. Lainey McRae scored two lay-ups, while Mary Glenn Warr scored a single lay-up.

In the second quarter, McRae scored two lay-ups again, while Warr scored a three-pointer, for a quarter score of 7 points.

Harrell scored a pair of free throws in the fourth quarter; McRae scored three lay-ups and a free throw; and Warr scored a three-pointer and a lay-up, for a final score of 38 points.

The Cougar Boys will play next at an away game against Citizens Christian Academy Friday night at 7:30 PM.

The Bainbridge Bearcats had an amazing football run this season, coming up just short in the Semifinals against the Marist... read more