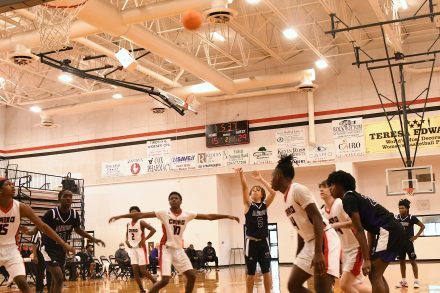 Dorrian Cooper attempts a free throw shot during Saturday’s game against the Syrupmakers.

The Varsity Boys Bearcat Basketball team played an away game against Cairo on Saturday. They had the lead for most of the game, ultimately scoring an overwhelming win, 67-54.

“Most of the game, we led by double digits,” Assistant Coach Kelvin Cochran said in an interview. “The boys played well, for us to not have two starters playing. The boys held the lead for most of the game.”
The Bearcats will play against Westover Friday night, hoping for another region victory.

Following a forfeiture from Monroe on Tuesday, the Bearcats took on their first region opponent TCC at home Friday, where... read more