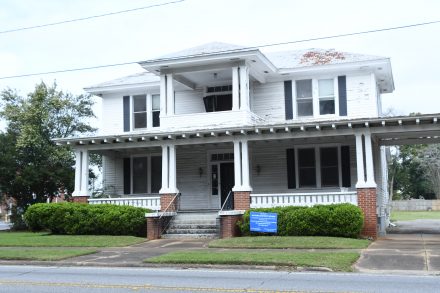 The Cooper House will have a new home and be moving to an adjacent lot in hopes of being restored and put on the market.

The Bainbridge City Council held their regular meeting on Tuesday, January 19, where they unanimously decided to enter into an Intergovernmental Agreement between the City, the Downtown Development Authority and First Baptist Church regarding the historic Cooper House.

First Baptist Church currently owns the property which the two-story Cooper House is located on, along with two smaller one-story homes. While owning the property, the Cooper House fell into a state of disrepair. In order to prevent the home from being lost, the Downtown Development Authority approached First Baptist Church and partnered with them, agreeing to take on the home if transferred to them.

The agreement states that the Church will transfer the Cooper house and a minimally sized lot to the east of the current Cooper house location. The DDA will take the lot as is and move the house to this lot, while the Church maintains the lot the Cooper house was previously located on in order to build a green space.

The smaller-one story homes will then be demolished at the expense of the DDA. Once the homes are demolished and the Cooper house has been moved, the DDA will have 18 months to sell the property. If the property does not sell in 18 months, the DDA can then take on the renovation project themselves or demolish the Cooper house. In the case of a demolition, the lot would then revert back to the Church.

In order to complete the agreement, the DDA has requested the funds and manpower from the City.

City Manager Chris Hobby admitted that this was not the perfect solution, but it was a solution that both parties could agree on.

Mayor Edward Reynolds questioned if the Cooper house would maintain the same property size, however Hobby explained that they would receive the minimum size lot with setbacks.

Councilwoman Sylvia Washington then confirmed that the City would not incur the house, but only the price of moving the home. Hobby explained that was correct and that their hope is someone will buy the home.

Councilwoman Roslyn Palmer showed her enthusiasm at the idea of the agreement and supported its notions.

“I think it’s a great thing that the negotiations worked out,” Palmer said. “I’m content that the lot size was discussed and worked out.”

Palmer then made a motion to pass the resolution, which was approved.