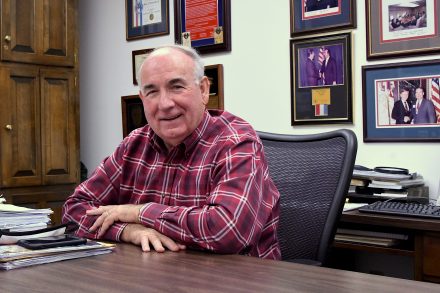 Alex Poitevint smiles after being named to the Georgia Ports Authority.

Governor Brian Kemp recently appointed four members of the Georgia Ports Authority, one of whom is Alec Poitevint. The chairman and president of Southern Minerals, Inc., this isn’t the first time Poitevint has worked for the Port Authority, having served from 2007 to 2016, and serving as the chairman from 2010 to 2012. “I’m honored that the governor would ask me to serve, and I’m proud to serve,” he told The Post-Searchlight.

The Georgia Ports Authority operates several major ports in the state, including Savannah, as well as the inland port here in Bainbridge. “The inland port here, last that I knew, was operating at capacity, serving the niche that it serves.”

According to Poitevint, who also served as a member of Kemp’s transition team, Kemp has plans for the state’s ports. “Governor Kemp has a very strong commitment to the Georgia Ports Authority. And he’s committed to the continued expansion, and developing all the opportunities that present themselves.” Those opportunities don’t necessarily include Bainbridge as a focus; “Those opportunities are primarily located at Savannah, and at Brunswick, and at Colonel’s Island… The benefit to businesses in Bainbridge for the Port Authority is associating with all the resources and so forth that we have deployed in Savannah and Brunswick.”

Poitevint had much praise for Kemp and his managing of ports in the state. “I think we’re blessed that we have a governor that’s so committed to our ports, and that the ports are professionally managed, and are very much an economic engine not just for Georgia, but for the Southeastern United States.”

Monday, January 11, a two-car collision occurred at the intersection of GA 310 and GA 38 that resulted in a... read more