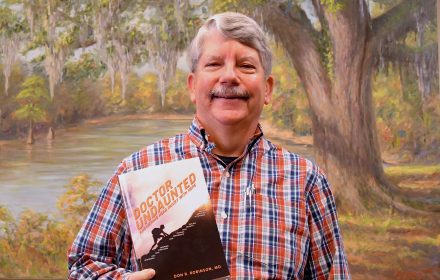 The book cover illustrates the difficult climb to health and wholeness experienced by those who suffer from concussion aftereffects.

Don Robinson, MD, who retired from his obstetrical/gynecological practice Jan. 31, 2019, after serving our medical community for 33 years, has devoted his spare time to write an autobiography about a specific era in his life.

The book is aptly titled Doctor Undaunted, as it reveals the medical difficulties Robinson experienced as the result of having three brain concussions, and more specifically following the one he experienced after a fall in February 2004. The other two were while he was on active duty with the U.S. Air Force.

Some of the side effects from a concussion can be long lasting and include balance issues, loss of memory, headaches and even peripheral vision disturbances. “The filtering system is not working as it should,” explained Robinson.

These brain issues are seen most prevalently in injured athletes and veterans returning from combat.

When the 2004 fall occurred, Robinson was in a full-time medical practice and he had to make sure he was protecting his patients while experiencing the after effects. He was especially bothered by the visual disturbances – seeing things out of place.

Robinson said he hopes his book provides hope for people who are experiencing things that doctors don’t always pick up on.

Robinson advises that these patients need three articles of support as they work through the healing process. One, from an understanding medical care provider they trust; two, a network of support from the people they work with, and three, a trusted confidant, such as a wife.

He hopes he will be able to work with personnel at military bases on a counseling and sharing basis once this COVID-19 is over, where he can share his perspective both as a patient and a clinician.

It took Robinson about a year to write the book and get it published. It became available in December and can be obtained from the publisher Westbow Press, Amazon and Barnes & Noble. He is hopeful of having a public book signing sometime in the near future.

WQLI Radio Station is the main station aired in Mitchell County and is based in Bainbridge, Georgia. The station is... read more