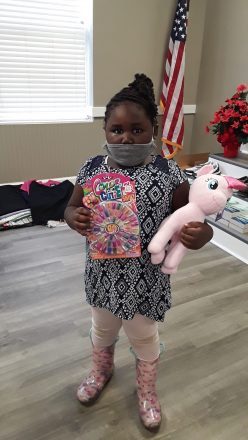 A young girl smiles after receiving sparkly nails and a unicorn as a gift from the Laymen Brotherhood.

The Laymen Brotherhood Second Chance Outreach Center, Inc celebrated it’s 12th Annual Pre-Christmas dinner and gifts/toys give away. The founders, Rev. Adren Bivins and his wife Sylvia Jefferson-Bivins greeted those who were in attendance of which were less than 50 people with masks. Over 100 people wearing were served a hot meal to go which included turkey, dressing, giblet gravy, cranberry sauce, green beans, rolls, pound cake and water. The food was catered by Mrs. Beulah Stubb-Handsford and Mrs. Annette Stubbs. Only 50 people were allowed to remain inside wearing a mask. The helpers in the kitchen were Martha J. King, Barbara Whigham-Eutsay, Betty Holmes, Sylvia Bivins and other volunteer helpers. Along with the meal, toys, adult and youth Bibles, clothes, shoes and other donated items were given out. The speakers were Rev. Adren Bivins, also the president of the First Flint River M B Congress of Christain Education, Rev. Bunevista Holmes of Jesus Saves Ministry and the Vice President of Laymen Brotherhood, Deacon Emory Brown Jr. the former Flint River Missionary Baptist Laymen president, Martha J. King the president of the Women Auxiliary of the First Flint River Association, Sylvia J Bivins and Patricia Burney a member of Emanuel M. B Church and a retiree of the Leon County School Board for over 35 years. Everyone gave an inspiring and uplifting speech. We want to thank God, the churches, the individuals, the businesses, Mr. Lenorris Clary and Crystal of the local radio stations and a special thank you to Mr. Scott and Mrs. Brenda Beigle of Faith Radio of Tallahassee, FL. We want to thank everyone who made this a great success. Coats were provided by a special donation. Jesus is the Reason for the Season. Thank you for your continued prayers and support as we continue to reach out to the youth of Decatur and surrounding counties. To God Be the Glory! Rev. Adren Bivins-Founder (229) 254-7606 www.thelaymenbrotherhood.com.

Senator Kelly Loeffler appeared in front of a large crowd of supporters on Saturday, December 26 at the restored World... read more