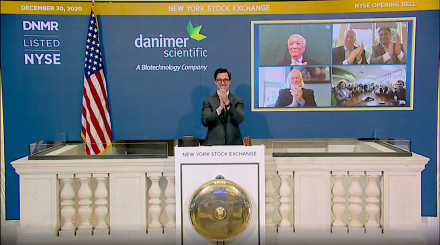 “The completion of our business combination represents a pivotal milestone in the global fight against one of the world’s biggest environmental problems – single use plastic waste and pollution,” said Stephen E. Croskrey, Chief Executive Officer of Danimer Scientific. “We are now fully financed to expand production capacity and meet the considerable expected demand from our blue chip, multinational customer base. Our customers view our Nodax™ PHA technology as a core component of their corporate sustainability strategy and a key vehicle to achieve their ESG commitments of reducing plastic waste by making their plastic packaging fully biodegradable. We are excited to become a publicly traded company and enter the next phase of growth as we broaden the reach of our remarkable Nodax™ technology.”

Danimer Scientific is a pioneer in creating environmentally responsible and natural alternative solutions to traditional petroleum-based resins. The Company’s signature polymer, Nodax PHA (polyhydroxyalkanoate), is a 100% biodegradable, renewable, and sustainable plastic produced using canola oil as a primary feedstock. Nodax PHA is the first PHA polymer to be certified as marine degradable, the highest standard of biodegradability, which verifies the material will fully degrade in ocean water without leaving behind harmful microplastics. As a result, Nodax offers a better beginning-of-life and end-of-life cycle than any of today’s traditional plastics and can replace the 80% of plastics that are never recycled or incinerated.

Danimer Scientific is currently producing and shipping Nodax at a commercial scale level from its existing facility in Winchester, Kentucky. The Company has partnered with key manufacturers and consumer products companies such as PepsiCo, Nestlé, Bacardi, Genpak, WinCup, Columbia Packaging Group, Kemira and Plastic Suppliers Inc. as they introduce more sustainable alternatives to straws, food and beverage containers, and flexible packaging, among others. Based on signed and pending contracts, the Company is fully sold out of all production in its Kentucky facility and will use its increased capital base to significantly increase production in seeking to meet the expected current and long-term demand of its customer base.

Rick Hendrix, outgoing Chief Executive Officer of Live Oak and now a member of the Board of Directors of Danimer Scientific, commented, “Danimer Scientific’s 100% biodegradable products put the Company at the forefront of sustainability and ESG leadership with innovative technologies that minimize exploitation of natural resources and enable customers to incorporate environmentally responsible products into their supply chains. Danimer Scientific represents a unique and compelling ESG investment opportunity with what we believe is a clear path to profitable growth. We are delighted to complete this business combination to accelerate the Company’s growth and create value for Danimer Scientific’s team members, customers, shareholders and the environment.”

As a result of this transaction, Danimer Scientific will now have approximately $380 million of unrestricted cash, net of transaction costs, on the balance sheet to fully fund future, planned growth, including the expansion of its current Kentucky facility and the build out of its contemplated greenfield facility. These funds are primarily comprised of cash from Live Oak’s former trust account and concurrent equity private placements from institutional investors, including certain funds managed by affiliates of Apollo, Federated Hermes Kaufmann Small Cap Fund, and over $50 million from Live Oak affiliates.

Legacy Danimer’s senior management team will continue to lead the now combined company. In addition to serving as Chief Executive Officer of Danimer Scientific, Mr. Croskrey has been named Chairman of the Board. Rick Hendrix, Chief Executive Officer of Live Oak, has joined Danimer Scientific’s Board, and John Amboian, Non-Executive Chairman of Live Oak, has joined the Board as Lead Independent Director.

A more detailed description of the transaction can be found in the proxy statement/prospectus filed with the U.S. Securities and Exchange Commission (“SEC”) on December 16, 2020 by Live Oak.