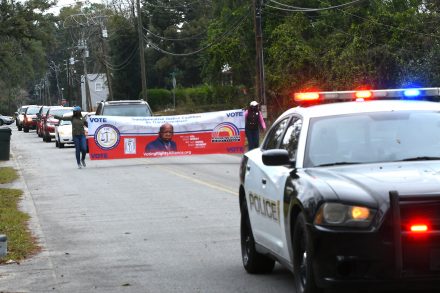 Monday saw a caravan of activists take to the streets of Bainbridge. Organized by Rev. Calvin Reynolds and affiliated with the Bainbridge chapter of the NAACP and Life Church of Bainbridge, the Congressman John Lewis Good Trouble Votercade started at Nelson Chapel AME Church and passed in front of the courthouse as people went in to vote. The aim of the “Votercade” was to encourage people to vote, with multiple similar marches being held around the state in time with early voting. According to Rev. Reynolds, the plan was originally to also provide transport for people to the courthouse and drop them off as they passed by; this was scrapped. “We thought it would cause too much congestion,” he said.

According to Reynolds, “We were approached to take part in this initially two weeks ago by the Transformative Justice Coalition.” The Transformative Justice Coalition describes their mission on their website as, “Systematic change that achieves racial justice, gender, economic and social justice and human right through public education and engagement initiatives that attend equally to hearts and minds as well as the social systems and structures in which they exist.” Other organizations listed in support of the march include the Feminist Majority Foundation, the Rainbow Push Coalition, The National Bar Association and the People’s Agenda, to name a few.

After the march passed the courthouse, it returned to Nelson Chapel for food, which was provided by KT’s Crab Shack.

Early voting is still ongoing, while voting for the run-off remains on January 5.

There will be a lot of excitement on Christmas morning for numerous children in Decatur County. Each year some of... read more