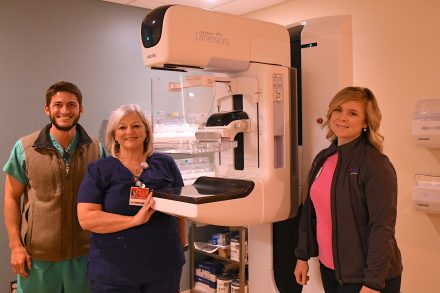 The new Hologic 3D Mammography system was installed earlier this month and it promises to provide better, earlier, more accurate breast cancer detection for patients than the 2D mammogram, detecting 20-65 percent more invasive breast cancers. It also reduces the chance of unnecessary callbacks by up to 40 percent compared to 2D.

New Director of Radiology at MHM, Dr. Charles Brown, says it is the best equipment available at this time and is getting good usage since installation the week of Dec. 9-11. Brown, who came to his position last June, recommended it to the hospital administration as he had used it during his radiology residency in Savannah, as well as in his radiology internship in Albuquerque.

Brown says women who are being screened with the new 3D are seeing little difference in the procedure between the conventional 2D and the 3D. The exam time and positioning are the same, but the technology is much more advanced and the results are much more accurate, as the doctor is able to view each breast tissue in millimeter layers instead of viewing all the breast tissue in one flat image. “Basically, it is like comparing the image from a cat scan to an X-ray. In my experience and based on a large study, I have found the new 3D Mammogram to be the best true Cancer detection system available. The detection rate goes up 30 percent.

“No one else is taking better pictures than we are,” says Brown, and MHM is taking lots of them. On Tuesday, Dec. 22, there were 13 procedures scheduled for that day alone.

Brown and his wife Sarah are both native Georgians, she originally from Bainbridge, and he from Tifton. They moved to Bainbridge with their three children, ages 7, 5 and 10 months in June of this year.

Dozens of golf carts crisscrossed the country club golf course this past weekend, though their occupants were golfing for a... read more