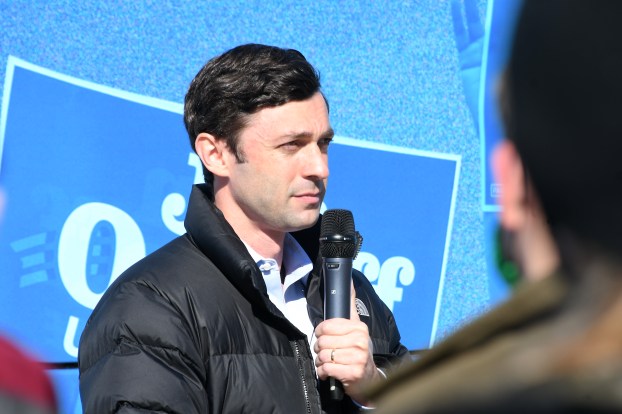 Campaigning on the trail: Jon Ossoff addresses a crowd of Bainbridge locals during his caravan tour on Friday.

Senate candidate Jon Ossoff passed through Bainbridge last Friday morning to campaign. The rally was held at the Earle May Boat Basin. Ossoff opened with how far he believes Georgia has come, and spoke on issues such as climate change, political donations and job loss caused by the pandemic. He also disparaged his and Warnock’s opponents, Loeffler and Perdue, likening them to Bonnie and Clyde over alleged corruption. The rally ended with a Q and A session and a photo session with Ossoff.

Several people in attendance gave their thoughts. “To my knowledge, Ossoff is the only person running for Senate that considers Bainbridge worthwhile, and that’s important,” Bob Woodward said. Others had come out in opposition to Ossoff. “I came out to show my support for Loeffler and Perdue. I didn’t agree with almost anything he said,” John Huggins said.

Ossoff went on to rally in Thomasville afterward. His opponents Kelly Loeffler and David Perdue will also be rallying in Bainbridge this Tuesday.

The tradition to honor and remember friends, loved ones through the Archbold Foundation Tree of Lights continues in spite of... read more