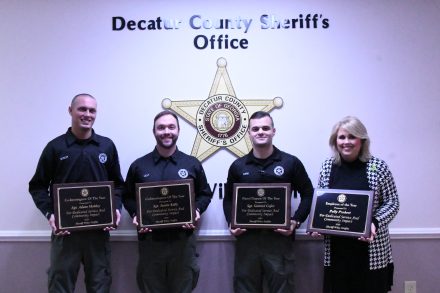 Left to right, Adam Mobley, Justin Kelly, Gabriel Cofer and Polly Probert hold up their awards after the swearing in ceremony.

Employees awarded during swearing in

Following Griffin’s swearing in, he returned to the Decatur County Sheriff’s Office, where he individually swore in every investigator and patrol deputy.

During the swearing in, Griffin also named patrol deputy of the year, investigator of the year and employee of the year.

Sgt. Gabriel Cofer was the 2020 recipient of the Patrol Deputy of the Year.

Cofer has been a deputy since 2017, and said he was surprised to win the award, which was voted on by his fellow deputies.

Cofer said co-workers look at the success rate of cases and how the public perceives individual deputies when voting.

“I try and carry myself to each call just the same I did as the one before and do the best I can,” Cofer said. “It feels good to know they recognized that and saw it in me.”

Mobley has been a Deputy for 8 years and investigator for three of those years, while Kelly has worked with the Sheriff’s Office for six years and three years in investigation.

“It’s always nice to be recognized for your hard work and dedication to making this community a safer place to live,” Mobley said.

Kelly said he was surprised to win, but thankful to his superiors recognizing the work he has put in this past year.

Mobley believes the award is indicative of the success rate in investigations he and Kelly have had this year.

“This is the best year we’ve had as far as cases go, since I’ve been at the Sheriff’s Office,” Mobley said.  “We are a great team and we do everything together; it is because we work so well together that we have a high success rate in our case files,” Mobley added. “Team work makes the dream work.”

Polly Probert was named Employee of the Year for her dedicated service to the office and community impact.

Griffin commended all deputies and investigators for their hard work.

“I’m proud of their hard work and dedication to the safety of Decatur County citizens,” Griffin finished.

The Harvest House of Hope, a Residential Recovery Home for Women is selling homemade candles and pepper sauce for buyers... read more