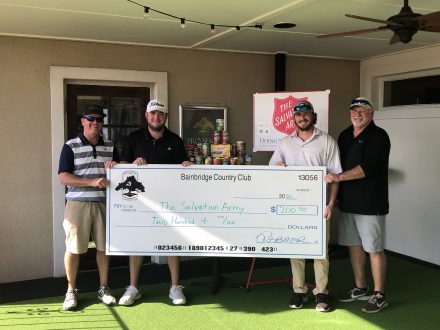 Dozens of golf carts crisscrossed the country club golf course this past weekend, though their occupants were golfing for a cause, not a trophy. The Third Annual Grinch Golf was held at the Bainbridge Country Club on Saturday, with the event functioning as a fundraiser for the Bainbridge Salvation Army. While the last two years were marred by rainy weather and low turnout, this year saw sunny weather and 14 teams of four competing.

“The turnout was great this year,” Merreann McDonald said in an interview. “This year the tournament raised $771.” For members of the club, the entry fee was $20 and a cash or food donation to the Salvation Army, while it was $30 and a donation for non- members.

Bearcats to host Semifinals for first time in school history

The Bearcats have punched their ticket to the AAAA Playoff Semifinals after a thrilling 21-10 win over the Cedartown Bulldogs... read more