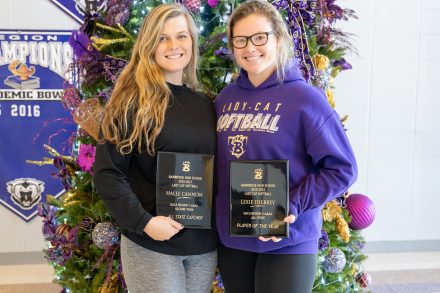 Halle Cannon (left) and Lexie Delbrey (right) were recently recognized by the GACA for their accomplishments. Halle was named to the All State 2nd Team, while Delbrey was named Player of the Year.

The dynamic pitching and catching duo, Lexie Delbrey and Halle Cannon of the Lady Cats softball team was recently recognized when Delbrey was named Georgia Athletic Coaches Association Player of the Year and Cannon was named to the 4A GACA All State 2nd Team catcher.

Head Coach Christopher Bryant said each coach from the across the state nominates students from their team to be named as an All State player. The region champion coaches then get together and select who will be on the All State team from over 270 nominations.

According to Delbrey, being named All State means athletes are now competing with the best of the best out of their graduating class. However, being named Player of the Year is an even bigger accomplishment.

“That was a huge accomplishment for me, especially it being my senior year,” Delbrey said. “I’ve worked really hard to do that.”

Cannon also put in the work Bryant required of her, in order to receive this title.

“I primarily don’t play catcher on my travel ball team,” Cannon said. “I had to adapt to what Coach Bryant needed me to do, so it was a huge accomplishment to be named All State catcher.”

Cannon will now go on to play in an All State game in June, along with other players from across the state, including competitors from TCC.

Delbrey has already participated in her game and said sadly her team lost, but win or lose she was just really grateful for the opportunity to play.

Cannon echoed her statement, saying she was grateful for this season and all the hard work the team put in to get as far as they did.

“It really paid off,” Cannon finished.