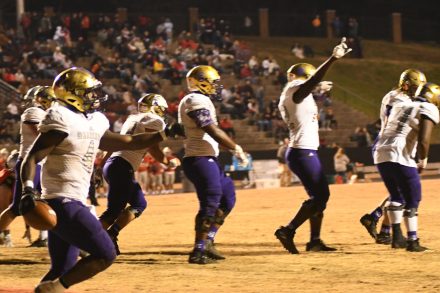 The Bainbridge Bearcats successfully beat the Cedartown Bullodgs on Friday night in a 21-10 game, allowing for the Bearcats to advance to the Semifinals and make school history as they host the final playoff round at home.

“It’s a great feeling to be at home and have such a big event in our community,” Head coach Jeff Littleton said.

The Semifinal game will be played against the Marist War Eagles out of Atlanta.

However, their rankings don’t scare Littleton; they excite him.

“Marist has been a top program consistently,” he said. “It’s exciting we get to play such a highly respected team.”

The program is a very physical team on both offense and defense and has a solid special teams, according to Littleton.

Some of Marist’s key players include Senior Josh Moore, who plays both wide receiver and defensive back.

Senior Charlie Fleming is also a wide receiver and defensive back to look out for.

Running backs Ian Otten and George Parker are key in the game, but linebackers Lincoln Parker Tyler Hare are who creates the problems Littleton said.

“It’s going to be a hard fought ballgame,” Littleton reiterated. “We are going to have to really get in the trenches. The team who controls the line of scrimmage and makes explosive plays will win.”

In order to get the win, Littleton said the team is continuing to improve daily on little things.

He said they are focusing on third downs in practice this week along with penalties caused by special teams that result in yardage loss.

Littleton and the team look forward to these final practices paying off in Friday night’s game.

GHSA has set the price for this week’s game at $15 for adults and $13 for students.

Students may purchase their tickets during lunch on Wednesday and Thursday only.

All tickets will be general admission tickets and regular season reserved ticket holders will need to show their tickets to sit in their reserved seats.