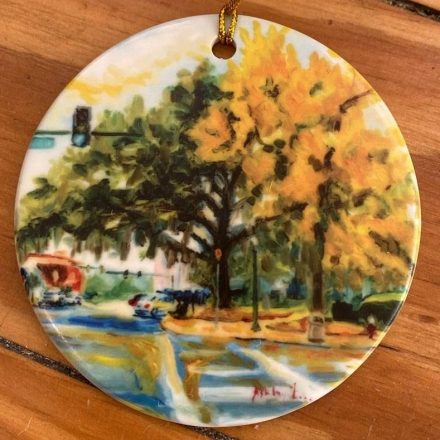 Since 2017, local artist Ashley Long has been creating one-of-a-kind ornaments for the City of Bainbridge. This year’s ornament features the prominent Ginkgo and Oak trees on the corner of Broad Street and Broughton Street in Downtown Bainbridge.

Long said he originally painted the intersection and trees three years ago, but they weren’t featured on the ornament until this year.

“It was a perspective we had never seen before with the gold glistening off the trees and onto the street, said Downtown Development Authority Director Amanda Glover.

Glover also liked the ornament idea because trees are such a focal point in Decatur County and guests are consistently commenting on the beauty of the old oaks.

“We really are just glad we get to feature another local artist and we hope to continue producing these ornaments in the future,” Glover said.

The DDA is also selling Mary Cox’s official city ornaments from years past.

The other years are in stock and available for purchase at the DDA’s Office for $8.

Bearcats to host Semifinals for first time in school history

The Bearcats have punched their ticket to the AAAA Playoff Semifinals after a thrilling 21-10 win over the Cedartown Bulldogs... read more