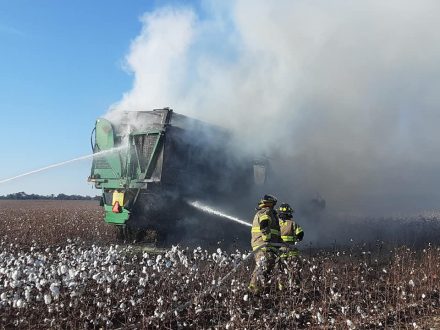 Wednesday afternoon was a busy one for Decatur County Fire & Rescue, who responded to two separate cotton picker fires.
DCFR Engineer Brad Brooks said this is not uncommon during cotton picking season.

“Usually when cotton picking season starts, the calls start coming in,” he said. “We’ve already responded to three cotton picker fires prior to these calls.”

Brooks said the causes for the fires can vary, but usually the cotton stalks or clippings get caught and build up on already heated spindle, causing the fire to erupt.

Brooks said if the fire is not caused by the buildup of clippings, it may be a mechanical or electrical issue.

The first fire DCFR responded to Wednesday was a fully involved cotton picker fire on Stubbs Road and Mock Cemetery Road.
Brooks said he believes this fire was a case of the clippings getting built up. Brooks said the driver of the cotton picker was not hurt and he does not believe much of the cotton was damaged.

Brooks said in cases such as these, drivers of the cotton pickers are usually able to dump the cotton quickly into another truck using their hydraulic lines, however if the hydraulic lines catch fire or are damaged in the fire, it can cause farmers to lose the entire amount of cotton that had already been picked.

Brooks also said, depending on the fire some of the cotton underneath the picker and in the fields can catch fire. Luckily, Brooks and the DCFR team is able to respond quickly and this usually does not happen.

The second fire DCFR responded to on Wednesday was also a fully involved fire on New Home Church Road.

Brooks said the fire broke out earlier in the morning, but the driver had a water truck near and was able to extinguish it. Thermal imaging cameras were used to determine if the picker was completely rid of the flames and able to be used again and the camera showed it was.
However, the camera was not able to pick up some internal issues and caught fire later in the day again, requiring the DCFR team to respond.
Brooks believes this fire was the result of a mechanical or electrical issue.

Brooks is thankful everyone involved was okay and able to return to service. He encourages cotton pickers to be aware of the fires than be caused when cotton stalks build up and he suggests checking to make sure they are being filtered properly.

BY ETHAN REDDISH A notable member of the Bainbridge and Decatur community passed away last week. Joseph Cary Dollar, while... read more