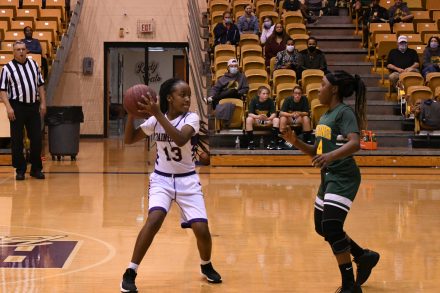 Aniya Sheppard looks for a teammate to throw the ball to in Wednesday’s game against the Whigham Lady Indians.

Wednesday night the Bainbridge Middle School Cats and Lady Cats Basketball team took on the Whigham Indians at home, where the Cats scored a major win, 47-17 and the Lady Cats narrowly lost in the last half 25-29.

BMS Lady Cats coach Reca Flanders said despite the loss, she was still really proud of her girls, as they haven’t practiced in almost three weeks due to COVID-19 exposure.

Coming out of the half, the Lady Cats scored eight points in the third quarter. Da’nydia Campbell scored six points, while Jaleena scored another two. Not only did the Lady Cats score eight points, but their defense also made up for some of the lacking points and held the Indians to only five points.
It all came down to the fourth quarter, where Jaleena scored two points and Destiny did as well. The Indians only scored three points, but they still came out victorious.

“I’m proud of them, they worked hard,” Flanders finished.

Following the Lady Cats game, the seventh grade Bearcats stepped on the court.

Tyrese Jones led the team in scoring with 23 points, followed by Lanorris Jenkins with 10 points, Trenton Lee and Daylen Green with 5 points and Jordan Florence and Bryce Olds with two points.

“This was a great team win for our middle school basketball team,” Coach Patrick Clark said. “They did good sharing the ball, rebounding and moving their feet on defense.”

Clark said this game was a huge improvement since the start of the season and this game proved that the players are beginning to understand their roles on the team.

BY ETHAN REDDISH A notable member of the Bainbridge and Decatur community passed away last week. Joseph Cary Dollar, while... read more