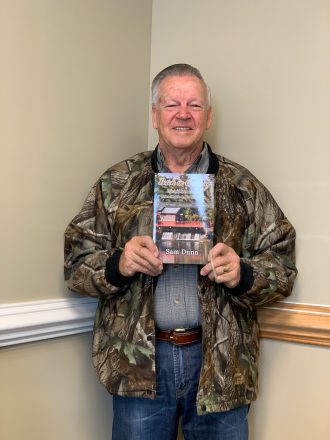 Sam Dunn smiles with his new work titled, “Back in the Day.”

Sam Dunn has some stories to tell about “the good ole days,” and he has spelled it all out in a new book he has authored titled, “Back in the Day.”

He said he was inspired to write it by his mother, Miss Mattie, who passed away at age 97 during the time he was working on the book.

Sam grew up on a farm in Miller County, where his dad was a sharecropper, having lost his own farm during the Great Depression.

He and his wife have now called Bainbridge home for 30 years, while also enjoying a cabin on Lake Seminole.

Dunn is retired from Winn Dixie, where he finished his career as a supervisor over 15 stores.

The book addresses some interesting and amusing data, such as how young people played the dating games back in the day—games like spin the bottle and penny prom.

Other chapters cover such items as how to make your own butter, soap, and other lost arts—things to which Dunn said his own children and grandchildren have not been introduced.

The book is available now on Amazon, and he has ordered 100 copies to be delivered, hopefully before Christmas, as he hopes to have a book signing on December 22 at Parker Paint.

Interested purchasers may call Dunn at 229-400-3151 for more information, or to place a local order.

Christmas Eve… and ‘all that brass’

An editor’s note to this article: As I was looking up the history of the Christmas Eve caroling in the... read more