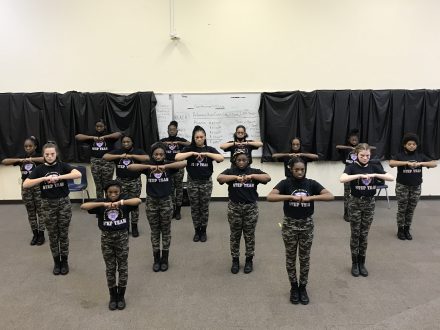 The BMS Step Team poses before going out to the basketball court to perform for fans and visitors.

Bainbridge Middle School basketball fans and visitors alike were treated to a special surprise on Wednesday afternoon when the BMS Step Team performed during half time.

Formed by Coach Dee Perkins and assistant coach Santerrica Thomas, this is the first year the step team has performed.

Perkins said the team was offered last year, however it didn’t stick. Now, the all-girls team practices three days a week and performs during the halftime of the BMS basketball games and is hoping to perform for the BHS basketball games.

Perkins recently moved back to Bainbridge in 2017 as a substitute teacher. In 2018 he became the assistant coach to the BMS competition cheer team and in 2019 he coached BHS basketball cheer; he then heard about the step team at BMS and revamped it.

A self-taught stepper and step master of fraternity, Phi Beta Sigma, Perkins had all the right tools to make the team a success.

Perkins said he first starts off with choreography.

“Any music that makes me happy and is something I can make a dance to; I try to put in their routine,” he said.

As for the team, they love it.

Not only do the girls get to learn new step routines, but they also get unique costumes to go along with the routine.

According to Perkins, Thomas’ mom went to Walmart, where she saw army pants. She then bought a variety of sizes for the girls on the team. The girls had a fitting session, where they each received a pair of pants and a t-shirt from Ken Young Company. The girls were responsible for getting the final touch, a pair of black boots.

Once in costume, the team felt ready to go.

“It’s absolutely rewarding to see the girls have something to look forward to,” Thomas said. “It develops discipline and it gives them something to take pride in.”

The team has every reason to be proud, as Perkins said none of the girls had prior stepping experience.

“They (the team) just started working at the end of October and beginning of November,” Thomas said. “They have really shown a dedication in practice.”

Their hard work and dedication paid off during Wednesday’s game, when they got applause from the stands.

Now, Thomas and Perkins are getting interest from other students, who want the opportunity to participate.

“We would love to grow the team, however right now it is only open to 7-8th graders as a BMS extracurricular activity,” Perkins said.

In order to help grow the team, Thomas said they are accepting donations for costumes and they plan to host future fundraisers.

The team and coaches appreciate the support they have gotten thus far and cannot wait to see where stepping takes them next.

The Bainbridge High School FFA Chapter is proud to introduce the members of our officer team. Below you will see... read more