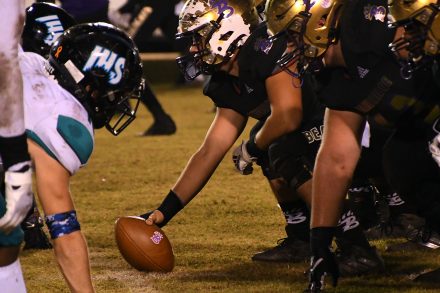 The Bearcats faced Islands last week, winning in another shutout. Now, they prepare to take on the Cedartown Bulldogs in the AAAA quarterfinals.

The Bearcats have a tough week ahead of them as they will travel to play the Cedartown Bulldogs on Friday night in the AAAA Playoff Quarterfinals.

According to head coach Jeff Littleton, Cedartown has not lost since the first two games of the season and is undefeated in region play.

“I don’t know if the losses were COVID related, but they’ve played some pretty good teams and they are good in all three phases of the game,” Littleton said.

The Bulldogs are currently on an eight- game winning streak, most recently beating North Oconee 56-0 on Friday night.

Littleton said in order to beat the Bulldogs, it’s going to take a great week of practice and a ton of preparation.

This week’s practice schedule does look a little different for the Bearcats, as the starters will travel to Cedartown on Thursday to prepare with the JV team joining them on Friday.

“We want to try to keep everything as normal as possible, though leading up to Thursday,” Littleton said.

Some of the key things Littleton is looking to work on during practices is offense.

“Offensively, they (the Bulldogs) run it right at you,” he said. “They’re a physical football team and we are going to have to stop the run first and foremost.”

Defensively, the Bulldogs are also sound and Littleton said they are coached well on both sides of the football.

“Every round we go, it’s going to get tougher,” Littleton said. “It’s going to take our best effort.”

Littleton knows the Bulldogs have somewhat of an advantage playing at home, but he said the Bearcats plan to bring a little something extra to the game.

Despite the tough competition, the Bearcats have historically done well on December 11, when the game is set to be played.

According to statistician Chip Ariall, this will be the fifth time the Bearcats have played on December 11, going 3-1 on that date.

The team has previously won a 1931 conference and South Georgia Championship against Valdosta on that date, along with a State AAA title against Gainesville in 1982 and most recently a AAAAA State Title vs. Warner Robins in triple overtime in 2018.

Littleton knows Cedartown is a bit of a haul, but he encourages all the fans to come cheer on the Bearcats and make it a December to remember.