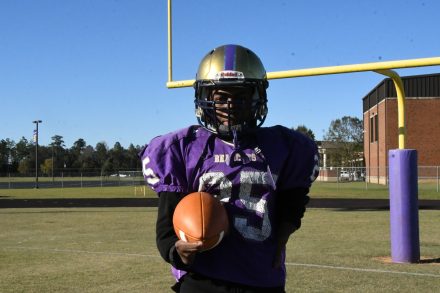 Jamauri Williams stands at practice the Monday after catching a pass during the playoffs.

An inspiration to others

Saturday night’s first round state playoff game against Westside Macon will be remembered for years to come as the Bearcats held the team scoreless throughout the entirety of the game, winning in a resounding 42-0. However, for freshman Jamauri Williams the game will stand out for different reasons.

Williams caught a 5-yard pass for the first time in a varsity football game. While a caught pass is always something to be proud of, it was a reminder to Williams he can do whatever he sets his mind to.

Williams was born with a birth defect, causing him to have no hands.

“He never makes excuses, he wants me to treat him like everyone else,” Head Coach Jeff Littleton said.
Littleton did just that on Saturday, when he sent Williams onto the field to receive for the Bearcats.

“It was a great feeling, amazing,” Williams said after catching the ball.

Williams said he has been playing football ever since he was little, and while he wanted to go out and play, he said his mom was always afraid he would hurt himself.

However, Williams was determined and eventually convinced his mom to let him play.

Since first starting off, Williams has grown in confidence and ability.

Earlier this season, he ran a touchdown for the 9th grade Bearcats.

Now, he has his eyes set on becoming the first-string wide receiver for the offensive line.

“Them putting me out there on Saturday, shows me I’m working hard enough and looking good,” Williams said.

Williams also hopes this latest accolade inspires his younger brother, who plays football, to keep up the hard work.

“You can do anything you want if you put your mind to it,” he finished.

Bearcats leave Sharks floundering in second round of playoffs

BY ETHAN REDDISH The Bearcats won another shut-out victory Friday night against the Islands High School Sharks from Savannah, with... read more