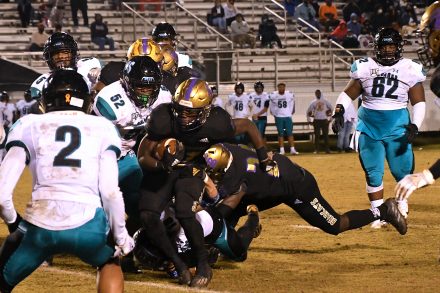 A Bearcat picks up the ball and runs down field, while teammates pile on a Shark.

Bearcats leave Sharks floundering in second round of playoffs

The Bearcats won another shut-out victory Friday night against the Islands High School Sharks from Savannah, with the final score of 43-0.

The Bearcats started strong, scoring 29 points before half-time, before finishing with a 56-yard pass in the third quarter and a one- yard run into the end zone in the fourth.
The first quarter saw Braxton Johnson score with an 8-yard run at 3:26, though the extra point was not scored.

The second quarter saw Johnson score with a 35- yard pass at 11:51, though the attempted pass to the end zone for the extra point was incomplete. Shortly after, at 10:37, Johnson then scored with a 10-yard pass from Quayde Hawkins, with Blake Fagan kicking. At 7:12, Ridge Baggett scored a 1-yard run, with Nicholas Tyre kicking. Finishing the second quarter, at 0:04, Tyre scored a 40-yard field goal.

The third quarter saw Ahmari Borden score from a 56- yard pass from Hawkins, with Fagan kicking. The last run was during the fourth, at 5:03, with Jah’Marion Smith scoring a 1-yard run, and Luke Emmons kicking.

The boys were thrilled, dancing on the field afterward.

Coach Littleton was pleased with the progress the team had made since the last game.
“We had four really, really great practices all week… We made a lot of corrections on mistakes, and the scoreboard took care of itself”, Littleton said.

He praised their performance in the game, saying, “This team is playing with a lot of energy, and their finishing, and it’s because of how they practice… We had a few hiccups on defense’s third down with some pass interferences, but we played aggressively, and we’ll continue to get better.”

This win advances the Bearcats to the third round of the playoffs against Cedartown.

Christmas is in the air at the Earle May Boat Basin. Both the Tinsel Trail and lights along the river... read more