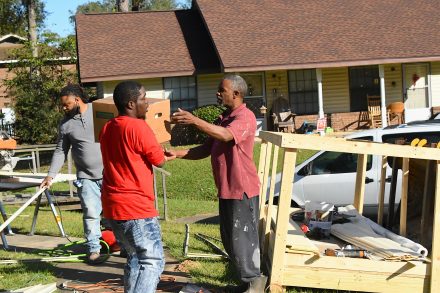 Salvation Army provides meals to those in need on Thanksgiving

The Salvation Army has been rather busy helping the community this holiday season, with two back-to-back days of community service. Tuesday morning saw them handing out Thanksgiving dinner boxes to seniors in poverty, with boxes containing mac n’ cheese, pumpkin pie filling and crust, tea bags, green beans, peas, corn, cans of cream of mushroom/chicken soup, and of course, a whole turkey.

The organization had been receiving donations for the boxes since roughly November 16-17, with James Robinson’s Taekwondo, Lucretia’s School of Dance, Tony Suggs, Bob and Jeff’s IGA and the BHS AFJROTC all contributing.

“You’d be amazed at how generous people are this time of year,” Tina Moody said. According to Moody, the Army is in talks of doing something similar with soup for Christmas.

However the donations didn’t end there, as on Wednesday morning, the Thomasville branch of Second Harvest of South Georgia made a huge donation of food boxes, this time with filled perishable items like milk, eggs, meat and fresh vegetables. With director Merreann McDonald in charge, members began distributing food to various poor apartment centers and communities throughout Bainbridge.

“I’m following the Lord’s lead on this and going where he tells me, because this was not on my agenda today,” McDonald said.

Owners of The American, Heather and Tyler Thomas got the surprise of a lifetime on Veteran’s Day, when they were... read more