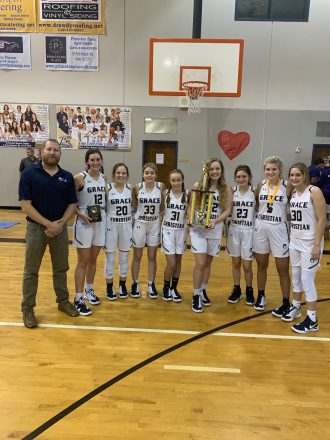 Coach Lance Godwin smiles with the Lady Cougars basketball team after they won the Byne Tip Off Tournament over the weekend. Lainey McRae was named Girls MVP in the tournament and Ella Harrell received a medal for Tournament All Team.

Friday afternoon, The Cougars and Lady Cougars basketball teams headed to Albany for the Byne Tip Off Tournament, where the Lady Cougars took home the championship and the Cougars ended 1-1 for the weekend.

The night started off with a win for the Lady Cougars, as they beat Chess 69-31.

Lainey McRae and Ella Harrell both kicked off the first half strong.

McRae made four layups and shot for a free throw, totaling for nine points in the first quarter. Harrell made one layup and a free throw for three points.

Mary Glenn Warr and Katherine Griffin both scored two points, for a total of 16 points in the first quarter, while Chess scored 14.

Harrell dominated the second quarter, scoring 10 points on layups and free throws. McRae followed her up with eight points, Warr with four points and Kassidy Widner with two points.

The team scored 24 points in the second half, while defense held Chess to six points.

The Lady Cougars continued to remain dominant following half time.

Adams led the team in the fourth quarter, making two three-point shots, while Harrell and McRae ended with a layup.

Saturday, the Lady Cougars fought a battle for a win against the Byne Christian Saints in a close 42-41 game.

The Saints started off strong scoring 16 points in the first quarter, while the Cougars only scored eight.

The points were primarily made by a series of free throws. McRae made two points on free throws, while Harrell scored one point, along with Isabella Barnett. In addition, McRae made one layup as did Warr.

The Saints were only held to six points in the second quarter, however the Lady Cougars still could not make up for the 16 points scored during the first quarter.

Coming out of halftime, the Lady Cougars were determined for a win.

McRae came out and scored eight points in the third quarter, while Warr scored two.

It all came down to the fourth quarter, when Widner scored six points, while McRae, Warr, Harrell, Barnett and Griffin scored two, totaling 16 points.

“We started out slow today but we started playing our ball in the second half,” Coach Lance Godwin said. “Byne shot the ball great and played us very tough. We did a few good things at the right times to pull out the win.”

However, Friday night showed a different story for the Cougars.

The team opened the tournament against the Saints with a true JV squad, as the starters were in Jeffersonville playing football. This proved to be a tough match up, as they lost 23-69.

Nevertheless, the JV boys continued to fight hard and when the starters returned on Saturday, it was a story of redemption.

Kevin Brooks, Wyatt Carpenter and Corin McKay came out in the first half on fire.

Coming out of the second half, Carpenter was determined to win once and for all. He scored 10 points in the third quarter, while Pate Beckham scored two, along with Brooks and McKay.

McKay scored one final layup for two points in the fourth quarter, ending the game.

“The boys played hard as a team,” Coach Travis Harrison said. “It’s exciting to see how willing they are to share the ball and trust each other. I can’t wait to see what this team can do once they’ve truly had time to gel.”

The team’s next game will be against RFM in Quincy with the girls beginning at 6 p.m. and the boys at 7:30.