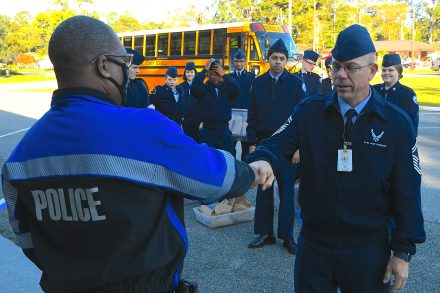 The Bainbridge High School AFJROTC have been working on several community service projects this semester, with each class block working on individual projects aimed at either helping the needy or honoring law enforcement.

“They first needed to brainstorm what project the class wanted to do,” Senior Master Sgt. Scott Morehouse said. “They then had to establish SMART (Specific, Measurable, Attainable, Realistic, and Timely) goals. Then they had to determine all the resources they would need to acquire to accomplish their project. If anything required money, the cadets needed to accomplish a fundraiser to raise the money.”

First block’s project consisted of making care packages for First Responders (the Sheriff’s office, EMS and Bainbridge Public Safety.) Both second and third blocks focused on the Salvation Army, with second putting together a clothing and canned food drive, and third helping with Toys for Tots. Fourth block chose to honor the Sheriff’s office by presenting them with Chick-fil-A gift cards on Veteran’s Day.

“I could not be more proud of all the hard work and dedication that the cadets have put into their community service projects,” Morehouse said. “In order for these projects to be successful, it takes the entire team to participate, and each cadet has done great.”

He concluded with reiterating the student’s mission. “The mission of AF JROTC is to ‘Develop citizens of character dedicated to serving their nation and community.’ The cadets getting involved in their community gives them a sense of being involved in something greater than themselves. The cadets that are in the BHS AFJROTC program have definitely achieved this mission.”